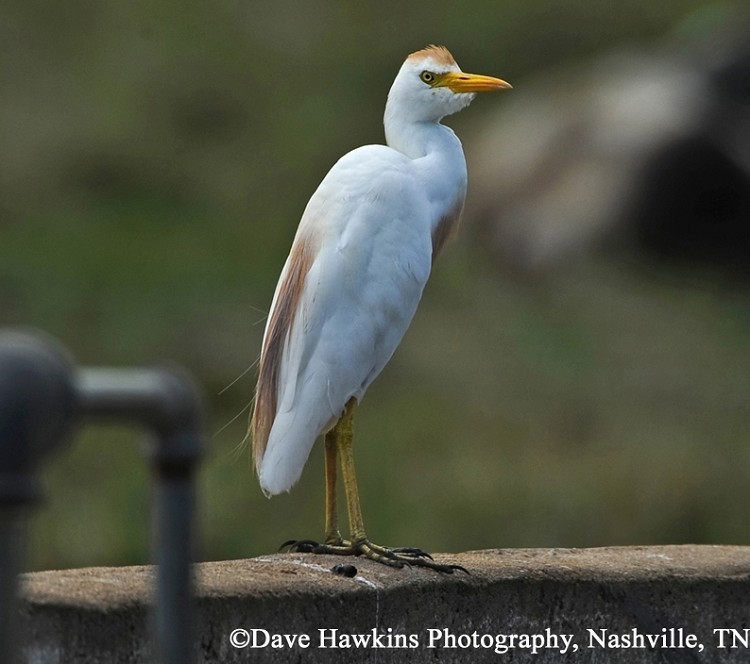 The Cattle Egret is a gregarious small heron more often found in pastures and along roadsides than in wetlands.  It is often seen following cows, horses, and tractors feeding on the insects that they stir up.  Until the late 19th century the Cattle Egret only existed in Africa and Asia.  It apparently naturally arrived in northeastern South America in the 1880s and established a breeding population.

This population rapidly expanded reaching Florida in the early 1940s and Tennessee in 1961.  In the next 50 years it became one of the most abundant of the North American herons, and is now found from Alaska to Newfoundland and has bred in nearly every state.

During the winter it migrates to the southern Atlantic and Gulf Coasts, Florida, and southward into Latin America.

Both the male and female look the same.

Habitat: Forages in many habitats including lawns, fields, roadsides, ponds, and pastures, often in association with grazing animals

Nesting and reproduction: Breeds in colonies with other herons on islands, isolated woods, and swamps.

Clutch Size: Usually 3 to 4 eggs, but occasionally as many as 5 eggs.

Incubation: Both parents incubate for 22 to 26 days

Fledging: Both adults regurgitate food for the young who start climbing around the nest after 3 weeks and are independent of parents by about 6.5 weeks.

Nest: The male brings nest material to the female, who builds a bulky platform of sticks and leaves, usually built over water, in willows or dense shrubs.

Status in Tennessee: The first record of a Cattle Egret in Tennessee was in 1961 in Anderson County.  The first nesting record was of 8 nests in a mix-species heron colony in Dyersburg in 1964.  Currently it is a fairly common summer resident in West Tennessee and rare in Middle and East Tennessee.

Cattle Egrets arrive in the state in early April and depart by November.  The number of breeding individuals and the number of colonies they nest in has varied, but there continues to be an overall increasing trend.  Cattle Egrets may compete with native species for nest sites in some areas, but in general, their impact on native species is considered minimal.