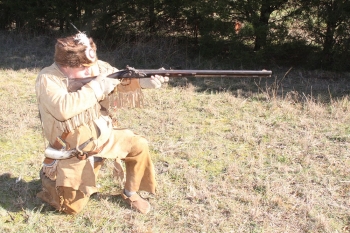 Clarence Dies pulls on his home-made buckskins and leather moccasins dons a cap fashioned from the pelt of a beaver and lips a hand-forged knife fr1to a fringed heath.

He straps on a powder horn and greased leather 'possibles" pouch it contains everything a frontier hunter could possibly need and shoulders vintage flintlock rifle.

He steps out his home in the Lebanon suburbs and into the 18th century.

"It takes me back to another time," says Dies, one of a growing number of primitive hunters who emulate the means, methods, and manners of their frontier forefathers.

"Several years ago, I became involved with what was called 'muzzleloader hunting,’ and it just kept evolving. The deeper I got into it, the more fascinating it became.”

Primitive hunters don't merely pursue game animals, they seek a connection to a distant past.

"If it was just about harvesting a deer we could do it a lot easier with modem rifles and equipment," Dies says. "But it's much more than that. It's about learning about the challenges those early hunters endured and trying to share them. It makes you appreciate what all they had to overcome when they headed into the wilderness."

He continues: "Just think about the things we modem hunters take for granted nowadays, like water­proof boots, warm clothes, and guns that never misfire.

"They carried their guns in all kinds of weather - rain, snow, sleet - and white crossing rivers and streams. Imagine how hard it was to keep the powder dry, especially the charge in the rifle's pan. When you study about how they managed it, you find that a lot of hunters used a piece of cowhide, dried hard and molded to fit over the hammer and pan to protect it from rain. Remember, on the frontier, a mis­fire could be fatal. I find details like that fascinating."

“Both,” he says with a chuckle. “I’ve always been interested in history, especially in Tennessee history. I grew up reading about David Crockett and other frontiersmen and pioneers. We have a rich frontier history here in Middle Tennessee. It's intriguing to prowl some of the same hills and hollows and riverbanks that the first long-hunters explored almost 300 years ago."

The origin of the term "long-hunter" has been debated. Some claim it came from the fact that hunters often were gone from home for long periods of time – months, perhaps – collecting meat and pelts and mapping new territory. Others believe the term originated from the fact that most of the early frontiersmen carried long-barreled rifles.

Another historical tidbit offered by Dies: "Some of the early explorers traded with the natives, swapping various trade goods for pelts. They often measured a stack of pelts by the length of their rifle barrel; the longer the barrel, the higher the stack of pelts. That's one reason why they favored a long rifle."

Dies' flintlock is not a museum piece original, but a replica that he built from a kit. But he fires genuine black powder and hand­molded lead "punkin' balls" seated with a greased patch.

When the trigger is pulled, a chunk of flint screwed onto the hammer-lock snaps down onto the steel firing pin. The flintlock strike produces a spark that ignites a charge of powder tamped inside the gun's breach. With a thunderous boom, the bullet is propelled out of the rife or musket barrel amid a belch of thick, acrid black-powder smoke. (Hence, the name "smokepole" given to the musket by Native Americans.)

Sometimes the powder in the pan flashes without igniting the powder charge. That occurrence - a quick, bright flash that produces no results -- gave rise to the expression, "a flash in the pan."

A frontier rifle consisted of three basic components: the lock, the stock, and the barrel. It was possible to buy the individual parts, as needed. Or, if the entire gun was desired, it could be bought in its entirety -- lock, stock, and barrel. Hence, another modem-day figure of speech.

There is a national long hunters club, a branch of National Muzzle Loading Association. Formed in 1988, the Longhunters mission is to "promote muzzleloader hunting throughout North America (and) bring recognition to hunters who have chosen to pursue North American big game with the type of guns used by their forefathers."

The exact number of Longhunters or primitive hunters is impossible to ascertain because their definition is varied. Some are staunch traditionalists and stickers for authenticity, right down to their homespun linsey-woolsey britches and leather moccasins. Others shoot vintage black-powder flintlocks but don't dress the role; they may construct their wardrobe from L.L. Bean.

Dies leans toward the former - the traditionalists -- but not entirely. Take his buckskins, for example.

"They come from deer I killed and skinned, but the tanning was done by a commercial tannery," he says. "To tan a deerskin using only natural materials as the Native Americans did require a lot of time and hard work. Some anthropologists believe Indian women chewed the hides to make them soft and pliable.”

Clarence adds with a chuckle:

“Since I can’t get my wife to do that, I take my deer hides to a tannery. After they're tanned, I do the cutting and stitching."

Dies says how much authenticity is enough is up to the individual.

"Some primitives won't use anything 'modem' - nothing they couldn't get back in the 17th or I 8th century," he says. "That includes food. They won't carry candy bars or canned goods or plastics or anything like that. Their provender has to be authentic to the era, like jerky or dried peas or a chunk of cornbread.

"Even the grease they use on the musket-ball patch has to be something natural like bear grease or bees-wax, rather than a modem lubricant."

On the other end of the spectrum are muzzleloader hunters who shoot modem in-line rifles. They fire plastic-booted Sabot bullets propelled by clean-burning Pryodex pellets ignited by percussion caps or primers. Some hunters even mount scopes on their muzzleloaders.

"There's nothing wrong with any of that," says Dies, who used a modem-model muzzleloader to bag an elk during a Western hunt a few years ago, and who opts for a 12-gauge shotgun when turkey hunting.

"It's up to the individual hunter to decide what suits him. Somebody may want to be as authentic as possible in every detail. Someone else might choose to shoot a modem muzzleloader and use other modern gear. Another person might go for something in-between. There's no wrong way or 'right way.' It all depends on what the individual is striving for."

Take ramrods for example. Most modem muzzleloader rifles come equipped with sturdy plastic or alloy ramrods that are virtually unbreakable. Dies, on the other hand, whittles his ramrods out of wood. He whittles a lot of them, because - like the originals -­ they’re always breaking.

"When a bunter was wandering around in the wilderness back in the 1700s and something wore out or broke -a ramrod, for example - he couldn't run down to the sporting goods store and buy a replacement" Dies says. "He had to make one from whatever was at hand. Even back in the settlements they had to make most of what they used, from clothing to carving knives."

Portrayal of frontier men by Hollywood and Wall Disney can't always be trusted starting with those iconic coonskin caps.

They didn't all ear coon kin all the time," Dies says, "not even ol' Davey (Crockett). In some of his portrait , he's, earing what appears to be a wildcat-skin cap. Beaver­skin hats al o were popular because they shed water.”

A beaver-skin hat is Dies' choice of head-wear. He made it from the pelt of a beaver he trapped along the Cumberland River.

Dies' beaver-skin hat, home­made knife sheath, powder horn and other equipment are decorated with a bright array of beadwork, and the stock of his rifle is adorned with fancy engraving.

"Frontiersmen appreciated good craftsmanship he says. "Of course, the first thing they required was function - every piece of gear had to be reliable and durable - but they didn’t mind adding a Iittle color and decoration.”

"You have to get close to your quarry and make the first shot count because with a muzzleloader you probably won't get a second one.” Dies says. “You have to keep your powder dry and try to protect against a mi -lire. You I am lo appreciate all the challenges and obstacles hunters faced back then.”

Dies knows first-hand some of the frontiersmen's frustrations. Last season a forkhorn buck walked out of a thicket in front of him at about 30 paces - an easy shot with a modem rifle. Clarence raised his flintlock, aimed, and pulled the trigger.

The buck snorted, turned, and trotted away. Dies didn't get another chance during the season.

"I guess if I were a frontiersman I'd have gone hungry a lot," he jokes.

"But that's part of the challenge. You're not always successful. But when you are - when everything goes right and you make the shot and your deer drops - it gives you a special feeling of accomplishment. You went out and hunted the way your ancestors hunted, and you succeeded."

Larry Woody is a retired outdoors editor of The (Nashville) Tennessean who writes a syndicated newspaper outdoors column and contributes to various publications. In his more than 40 years with The Tennessean, he covered numerous sports and events. Among his honors. are his inductions into the International Motorsports Hall of Fame as a writer, the Martin Methodist College Hall of Fame, and the Tennessee Journalism Hall of Fame. He is a native of Crossville and resides in Nashville.