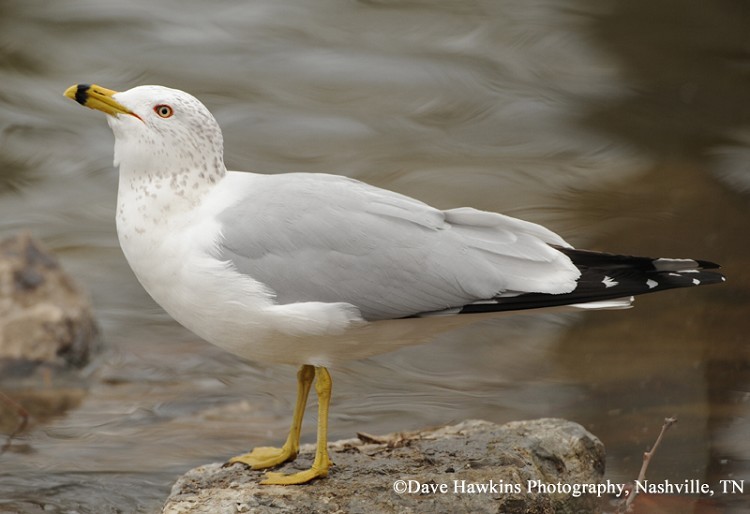 The Ring-billed Gull is a medium sized, white-headed, primarily inland nesting North American gull that frequents garbage dumps, parking lots, and southern coastal beaches in large numbers during the winter.  It is Tennessee's most common wintering gull arriving in late September and departing by early May.

This species was nearly decimated by human persecution and development from 1850 to 1920, but has since rebounded and the current population is in the millions of birds.  The breeding range extends from British Columbia eastward to Newfoundland, through the northern Great Plains and around the Great Lakes.

Ring-billed Gulls spend the winter on the coasts from British Columbia and Maine to Mexico, around the Great Lakes, and inland across the southern United States where open water and food are available.

Description: Like many gulls, it takes 3 years for a Ring-billed Gull to reach adult plumage.  In adults the head, tail, and underparts are white, the back and upper wings are light gray, and the wingtips are black with white spots.

The adult's legs and eyes are yellow, and the bill is yellow with a black ring near the tip.  During the first winter the back is gray, the head and underparts are speckled with brown, the wings are patterned with brown, white, gray, and black, and the tail has a black band.  Second-winter birds somewhat resemble adults but have a narrow black band on the tail.  Males and females look the same.

Nesting and reproduction: Ring-billed Gulls do not nest in Tennessee.  Gulls seen in summer are usually non-breeding immature individuals.

Status in Tennessee: The Ringed-bill Gull is a common migrant and winter resident across the state arriving in late September and departing by early May.

Best places to see in Tennessee: Ringed-bill Gulls are widely distributed across the state on major rivers, and large bodies of water from late September to early May.