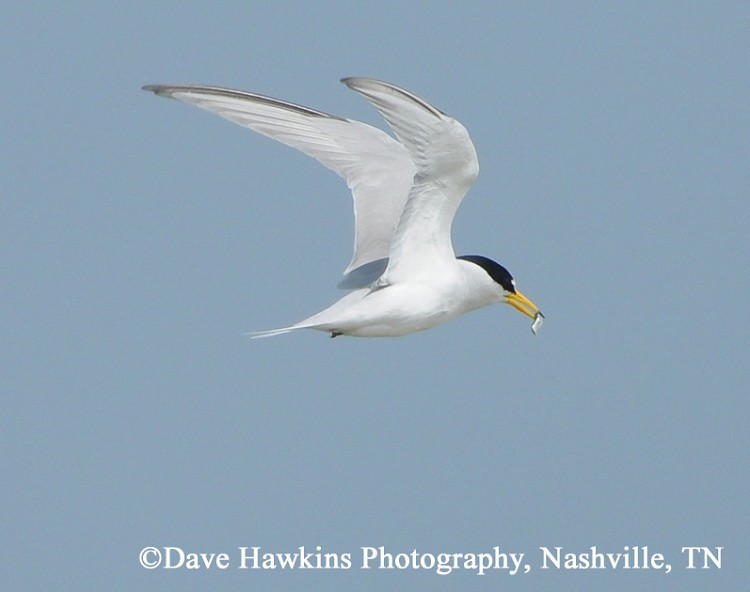 The Least Tern is the smallest tern in North America and nests on sandy beaches along both coasts of the United States, and along major rivers in the interior of the continent.  While its breeding range is broad, and it is common in places, this species has faced many challenges.

In the 1800s, ladies wore hats with bird feathers, and Least Tern wings were used as decorations.  In addition, there has been extensive loss of nesting habitat along rivers due to construction of dams and river channelization, reproductive failure caused by DDT, and conflicts with people who want to recreate on their sandy-beach nesting sites.

While conservation efforts have led to the recovery of many populations, concern over apparent continued declines in the inland nesting Least Terns led the U.S. Fish and Wildlife Service to list this population as Endangered under the Endangered Species Act in 1985.  The Least Tern is also listed as Endangered by the State of Tennessee. It can be found in Tennessee from mid-May to early September.

Description: This is a small, nearly all white tern, with a black cap that ends at a white forehead, and a yellow black-tipped bill.

In non-breeding plumage (September-March), it has more extensive white on the forehead and a black bill.    Juvenile birds (July-September) have a dark M-shaped mark on the upper wing.

Habitat: In Tennessee, Least Terns breed primarily on sandbars in the Mississippi River. During migration they can be found on lakes and large rivers throughout the state.

Nesting and reproduction: The Least Tern nests in colonies of various sizes. In Tennessee, all nest records have been on sandbars in the Mississippi River, or rarely sandy areas on the mainland up to a mile from the river.

It prefers sand island sites, with less than 10% vegetation cover, large amounts of driftwood, and little human disturbance.  The Least Tern arrives at potential nest sites by late May.

Incubation: Both parents incubate the eggs for 20 to 25 days.

Fledging: The young wander from the nest within a few days of hatching and begin to fly in about 3 weeks. They remain with the parents, who continue to feed them until fall migration.

Nest: The "nest" is a shallow scrape in sand, soil, or pebbles, usually near driftwood.

Status in Tennessee: The Least Tern is locally common during the summer along the Mississippi River and is a rare migrant elsewhere in the state. It arrives by mid-May in West Tennessee, and from July through early September it can be found on lakes and large rivers throughout the state.  The Least Tern is listed as Endangered by both the federal government and the state of Tennessee.

Best places to see in Tennessee: Least Terns can often be seen feeding along the Mississippi River during the summer. During fall migration they might be found on lakes and large rivers throughout the state.