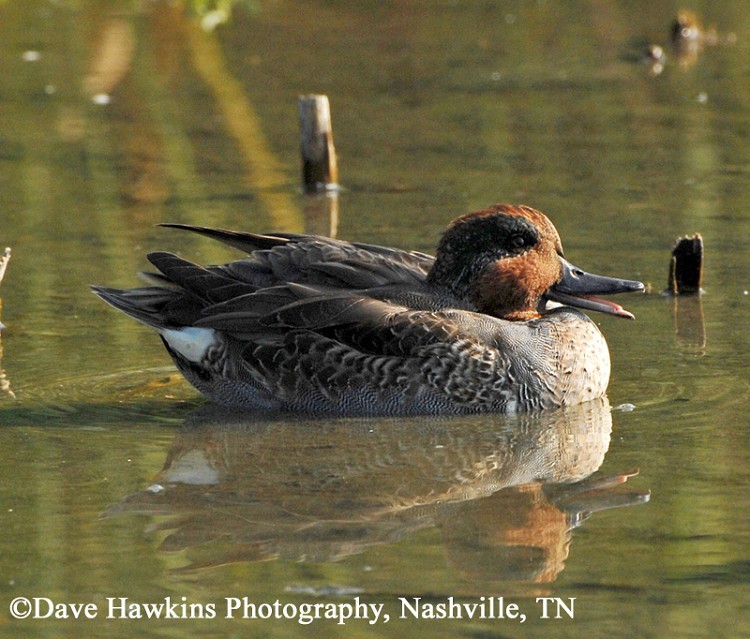 The brightly patterned Green-winged Teal is the smallest dabbling duck* in North America. It prefers shallow ponds with lots of emergent vegetation, and can be found in both fresh and saltwater habitats.

Green-winged Teal breed from western Alaska across Canada southward to the northern Great Plains and Great Lakes region. It winters across the southern half of the United States southward to southern Mexico.

In Tennessee, it is a fairly common migrant and winter resident across the state.

Description: The breeding male is boldly patterned with a chestnut head and green ear patch. He has a speckled chest, and gray body with a vertical white bar on the side.

The female is mottled brown with a white belly. In flight, both sexes show an iridescent green patch in the wing.

Habitat: In Tennessee, they are found in shallow pools, lakes, and on mud flats.

Diet: Insect larvae, and seeds of grasses and sedges.

Status in Tennessee: The Green-winged Teal is a fairly common migrant and winter resident in the state. They arrive in mid-August and become less numerous during the winter. Spring migrants arrive in March and most birds depart by late April. Populations appear to be stable or even increasing.

Best places to see in Tennessee: Most abundant in December and January and found at wildlife viewing locations across Tennessee.