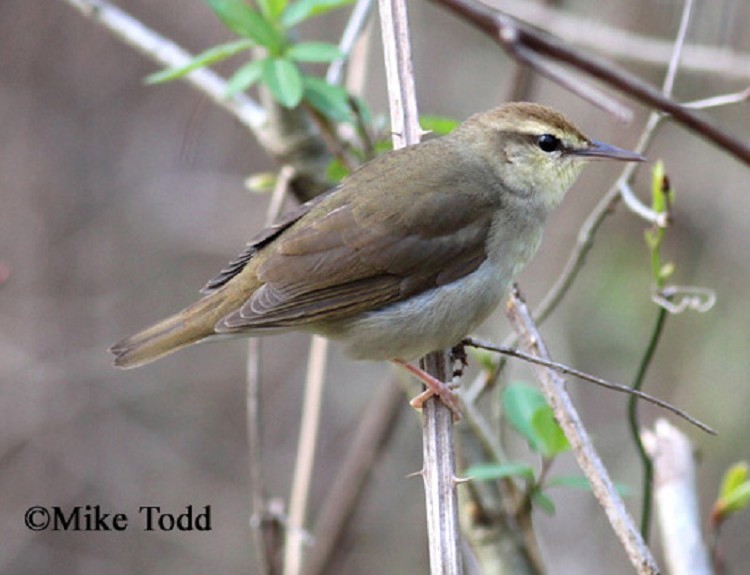 The Swainson's Warbler is unusual in that it breeds in two entirely different habitat types, both of which occur in Tennessee. In the western part of the state it occupies bottomland hardwood forests with cane or dense vine tangles;  in the east it is found in the mountains in dense evergreen undergrowth of moist forest ravines.

This is a secretive bird and if it weren't for its loud ringing song, it would largely go unnoticed. It arrives in Tennessee in mid- to late April and departs in early September.  The breeding range includes the southeastern United States from eastern Oklahoma to northern Florida, and the winter range includes the Caribbean islands and the Yucatan Peninsula of Mexico.

Losses to bottomland hardwood breeding habitat and wintering habitat have led this species to be considered of high conservation concern by Partners in Flight and placed on the National Audubon Watchlist.

Description: Both the male and female have a rust-colored cap on the head, are brownish-olive above and dull white below, and have a whitish line over the eye.

Voice: The song is a series of clear slurred notes descending with an emphatic ending. It is somewhat similar to the song of the Louisiana Waterthrush.
Length: 5.5"
Wingspan: 9"
Weight: 0.67oz

Habitat: In West and Middle Tennessee the Swainson's Warbler is found in wooded swamps with canebrakes or dense vine tangles, specifically the Mississippi River valley and the Hatchie River basin. In the mountains of East Tennessee, it inhabits rhododendron thickets along mountain ravines.

Diet: Primarily insects in, on, or near the ground.

Nesting and reproduction: Males will usually return to the same territory annually.

Incubation: The female incubates the eggs for 13 to 15 days.

Fledging: Both parents feed the young, which fledge in 10 to 12 days.

Nest: The female builds the bulky cup-nest of dry leaves and sticks, and lined with grasses, moss, and rootlets. It is placed low to the ground and resembles fallen leaf debris, and is very large compared to the nests of other warbler species.

Status in Tennessee: The Swainson's Warbler is an uncommon migrant and summer resident in East and West Tennessee, and rare in Middle Tennessee.  The bird is most numerous in the Mississippi and Hatchie River basins.

Scattered birds are found along drainages on the Cumberland Plateau up through the mountains of East Tennessee. It arrives in late April and departs by early September. Due to the loss of breeding habitat, especially in West Tennessee, the species is listed as In Need of Management by the state.