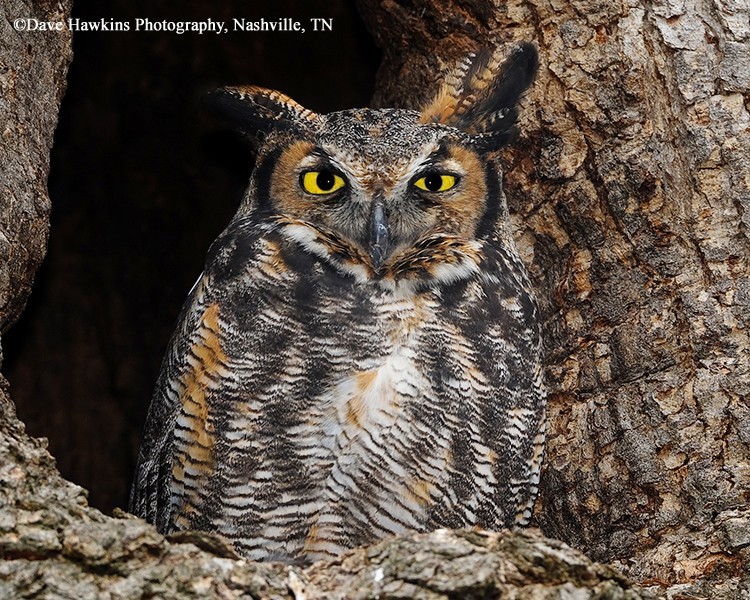 The Great Horned Owl is the largest owl nesting in Tennessee and is easily identified by its large size, ear tufts and yellow eyes.  It is a nocturnal bird, common and widespread across North America from the arctic tundra, south through Mexico and Central America, and locally to Tierra del Fuego.

There is little evidence of an annual migration even among the northernmost populations.  Its very low pitched five to six note hooting makes the Great-horned Owl easiest to detect in December and January when they are establishing territories. Like the Barred Owl, the Great Horned Owl is sometimes called a "hoot owl."

Description: Sexes alike in plumage, but as with most birds of prey, the female is larger.  The Great Horned Owl is a large, bulky, brown owl with prominent ear tufts widely spaced on head, a white throat, tawny facial disk outlined in black, and yellow eyes.

The male's voice is lower-pitched than the female's.

Voice: Song is five or six low-pitched, quivering hoots translating as Are you awake? me, too.

Habitat: The Great Horned Owl uses the widest range of habitats of any North American owl and is found in desert, grassland, suburban areas, deciduous and coniferous forest habitats.

In Tennessee, it is found in areas of mixed fields and woodlands, including upland and bottomland forest, agricultural areas, and urban woodlands.

Diet: Broad range of prey items including rabbits, geese, herons, some smaller birds, amphibians, reptiles, and invertebrates, but mostly mammals. They are the only bird known to readily kill and eat skunks.

Nesting and reproduction: Great Horned Owls are the earliest nesting species in Tennessee with courtship beginning in late fall or early winter. Eggs are usually laid in January. Great Horned Owls do not begin nesting until they are two years old.

Incubation: The female does most of the incubating that lasts 26 to 35 days.

Fledging: Both adults feed the young. They leave the nest at 5 weeks old but do not fly well until about 9 weeks old. They remain with the parents for up to 3 more months.

Nest: Great Horned Owls use a variety of nest sites, including trees, cliffs, buildings, and the ground. They often put nests in hollows or broken-off snags in trees and sometimes use the nests of other bird species. Nest height ranges from 30 to 50 feet above the ground.

Status in Tennessee: Fairly common permanent resident nesting throughout the state. Found in areas of mixed woodland and open habitat including upland and bottomland forest, agricultural areas, and urban woodlands.

Best places to see in Tennessee: Owls are never easy to see but can be located by their call in appropriate habitat statewide.