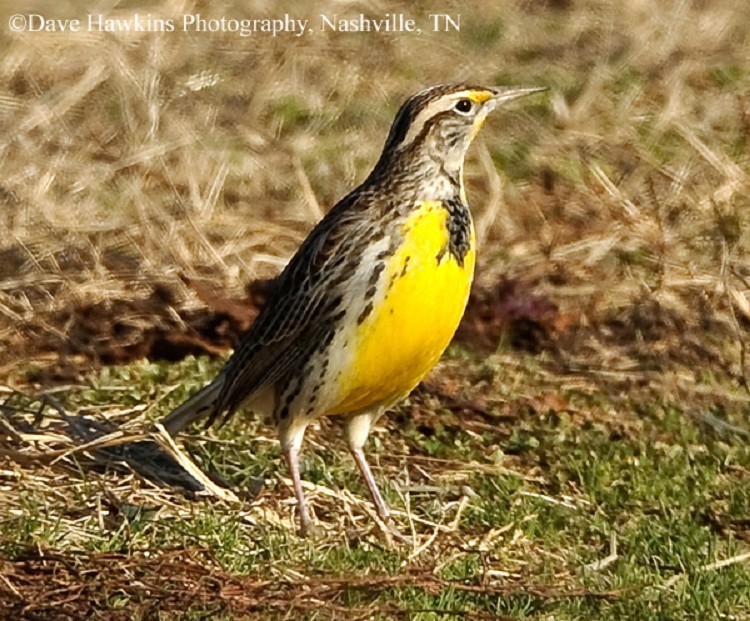 The Western Meadowlark is an abundant and familiar bird of open country found across the western two-thirds of North America and is a very rare, but regular winter visitor in West Tennessee. This species usually mixes with the much more abundant, and nearly identical, Eastern Meadowlark.

The more melodic song of the Western Meadowlark is not often heard during the non-breeding season, but both species have been known to sing each other's song.

Description: Like the Eastern Meadowlark, the Western Meadowlark is a stocky, robin-sized songbird with a brown-streaked back and a brilliant yellow breast with a prominent black "V." The tail is brown with white outer tail feathers, and the bill is long and pointed.

During the non-breeding season (September-January) the plumage is overall duller, with thinner black barring on the wings and tail feathers, whitish flanks, and a less contrasting head pattern. Inbreeding plumage (February-August) the mustache stripe beside the yellow throat is mostly yellow, not white.

Voice: The song is a rich, low, descending warble, with well-spaced clear notes to start, and a rapid gurgle at the end.

Habitat: Found in agricultural, grassy, or fallow fields, and along roadsides near the Mississippi River.

Nesting and reproduction: There is one nesting record for the Western Meadowlark in Tennessee from 1951 when a nest with two adults and six young was found at the Penal Farm in Shelby County.

Status in Tennessee: Rare, but regular, winter resident found in agricultural fields in West Tennessee, and can occasionally be found in flocks of up to a dozen individuals. Arrives by late October and usually departs by early May.