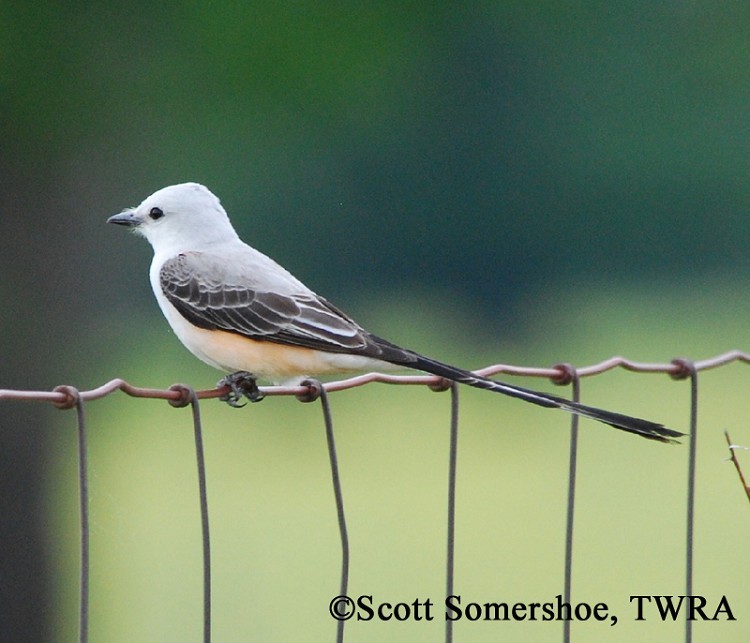 The Scissor-tailed Flycatcher is arguably the most elegant flycatcher in North America with its long forked tail and salmon-pink sides.

It has significantly expanded its breeding range in the past several decades and now nests in Tennessee. The first Scissor-tailed Flycatcher was reported in the state in 1964, the first nesting attempt was in 1978, and the first successful nest was documented in 1983 in Rutherford County.

It is now a rare but regular breeder in across Tennessee. The Scissor-tailed Flycatcher's breed range extends through the south-central United States and into northeastern Mexico; it migrates to southern Mexico and Central America for the winter, with some individuals wintering in southern Florida.

Description: This is a distinctive, medium sized flycatcher with an extremely long, forked tail (9" long in the male). It is pearl gray above with darker wings and tail, and white below with salmon pink on the sides, under the tail, and under the wings (visible in flight).

The female is paler with less intense pink, and a shorter tail. Juvenile birds (May-December) are similar to the adults, but have a shorter tail and are yellowish-pink where the adults are salmon pink.

Habitat: Breeds in open grasslands with occasional trees and shrubs. Also in towns and agricultural areas.

Incubation: The female incubates the eggs for 2 weeks.

Fledging: Both adults feed the young, which fledge in about 16 days.

Nest: The female constructs the bulky open cup-nest of plant stems, lined with finer plant materials. It is usually placed in a small isolated tree or large shrub but also on human-made structures such as utility poles.

Status in Tennessee: Uncommon spring and fall migrant. They are rare summer residents that can be found breeding across Tennessee. There is a concentration of breeding birds in the Memphis area and south of Murfreesboro in Rutherford County.

Best places to see in Tennessee: Memphis area, especially Presidents Island. Also at the intersection of I-24 and Hwy 840 in Rutherford Co. (Florence Rd. on NW side of intersection) is where a pair has nested for several years (2009). Also, the rural area southeast of Murfreesboro, east of I-24 has had several pairs in May and June.