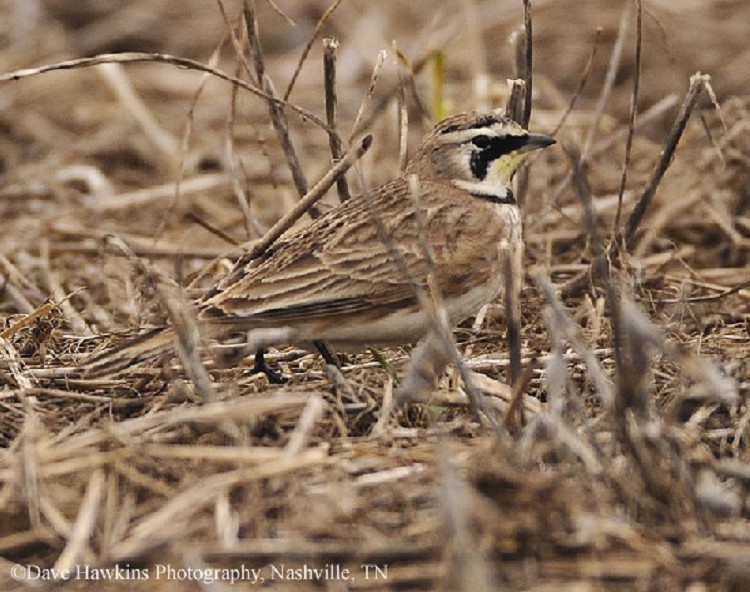 The Horned Lark was originally a species of the midwestern tall-grass prairie, but as humans cultivated the prairies and opened the forest, they expanded east.

The first Horned Lark recorded in Tennessee was in 1925. This is the only true lark native to North America, and the males have a conspicuous courtship flight, as do other lark species.  The broad geographic range of this species includes the arctic tundra and grassland areas across North America and Eurasia. In winter, Horned Larks inhabit the southern part of the breeding range from southern Canada southward.

Description: The head pattern of this small songbird is distinctive with little black "horns," a black mask, and a black bib. The back is pale brown, the breast white, and the throat is white washed with yellow. In flight, the tail is mostly black with white outer tail feathers.

The female is duller overall with less prominent horns. The juvenile (April-August) is overall grayish, with pale spots on the back and streaks on the chest.

Diet: Adults eat primarily weed and grass seeds, but they feed insects to their young.

Nesting and reproduction: Males have a conspicuous courtship flight song. Horned Larks are among the earliest nesting songbirds in Tennessee, laying eggs in early to mid-March. They usually raise two broods during the breeding season.

Incubation: The female incubates the eggs for 11 days.

Fledging: The male and female tend the young, which leave the nest in 9 to 12 days.

Nest: The female excavates a shallow depression in the soil and builds the nest of fine grass or other plant materials, and lines it with finer material.

Status in Tennessee: The first nesting record for the Horned Lark in Tennessee was in 1925 in Davidson County. The first West Tennessee record was in 1932, and the first East Tennessee record was in 1934. It is currently a rare summer resident in East and Middle Tennessee, and a fairly common year round resident in the western part of the state. In winter, it may form large flocks with individuals that migrate to Tennessee from more northern breeding areas. Rangewide the species appears to be declining.

Best places to see in Tennessee: Most easily found in agricultural lands in the Mississippi River valley.