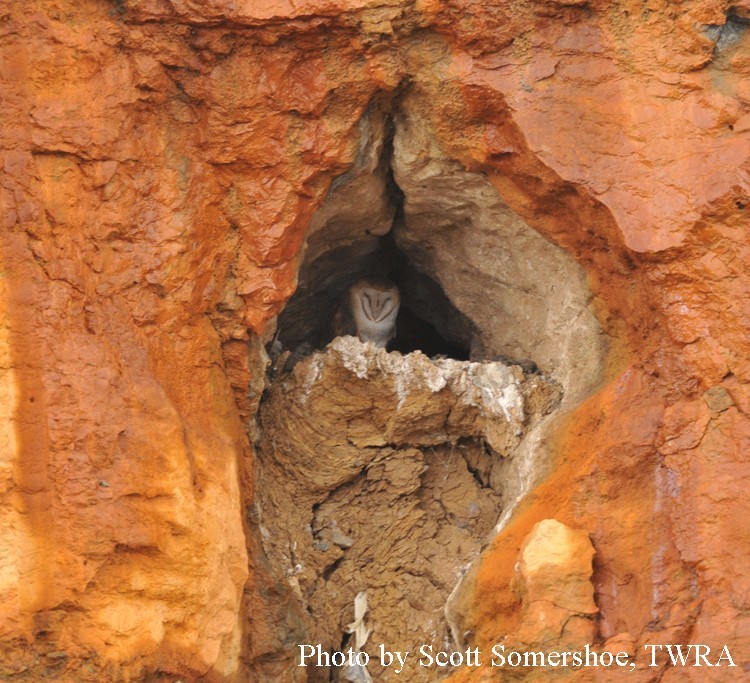 The Barn Owl is one of the most widely distributed birds in the world, found on every continent except Antarctica.  In Tennessee it is a regular, but rare permanent resident.

Most likely due to loss of habitat, populations appear to be in decline. The Barn Owl was listed as In Need of Management in Tennessee in 1976.

Like most owls, it is nocturnal and since it does not have a typical "owl-like" territorial call, it can often go undetected.

In addition to natural cavities in trees and bluffs, the Barn Owl will nest in a number of human made structures including church steeples, haystacks, nest boxes, and of course barn lofts.

It is found year round from southern Canada across the United States, and southward through Central and South America, and the Caribbean. It also inhabits Africa, Europe, southeast Asia, Australia, and some oceanic islands. The Barn Owl was introduced to Hawaii.

Description: The heart shaped-face, dark eyes and pale plumage makes it the easiest of the five Tennessee resident owls to identify.

The Barn Owl is a slim, medium-sized owl with long legs that are sparsely feathered. The back and wings are a light tawny with black and white spots, and below it is white to light cinnamon colored.

The male and female are similar in appearance, but the female is larger, darker, and more distinct plumage than the male.

Voice: The Barn Owl does not give a rhythmic hoot or a clear territorial call that are typical of other owls. The calls are clicks, harsh screeches, and whistles.

Manicured agricultural lands tend to not be very suitable habitat due to the lack of hunting perches and nesting sites.

Diet: In Tennessee, Barn Owls mostly eat voles (Microtus spp.), but also shrews and native rats.  Barn Owls typically hunt rodents and other small mammals, but they also eat birds, reptiles, amphibians and insects. It is nocturnal and hunts from a perch or on the wing, flying close to the ground.

Nesting and reproduction: Barn Owls are usually monogamous, although several reports of polygyny exist.   Pairs typically remain together as long as both individuals live.

Barn Owls may breed more than once per year. Nesting may occur in most months of the year, however nesting is likely concentrated from spring through early fall.

Clutch Size: Range from 2 to 18 eggs, with 3 to 9 most common. The local food supply appears to influence the number of eggs layed per clutch.

Incubation:  Female incubates the eggs alone for about 30 days while the male feeds her. Both adults feed the young, which are able to fly in about 60 days. The fledglings will return to the nest site to roost for several weeks.

Fledging: Both adults feed the young, which are able to fly in about 60 days. They usually return to the nest site to roost for several weeks.

Nest: The female will usually make a shallow cup of shredded pellets in existing cavities, except when they dig burrows with their feet in the soft soil of a riverbank. In addition to hollow trees, and cliff cavities, they will also nest in buildings, and nest boxes. Nest sites are often reused for many years but commonly with a high turnover of individual breeders. Next Box Instructions here.

Status in Tennessee: This owl is a regular but rare permanent resident throughout the state, somewhat more rare in West Tennessee. The Barn Owl is the least common of the 4 regularly occurring owls across the state. While difficult to survey, this species appears to be declining in Tennessee and was listed as In Need of Management in 1976.