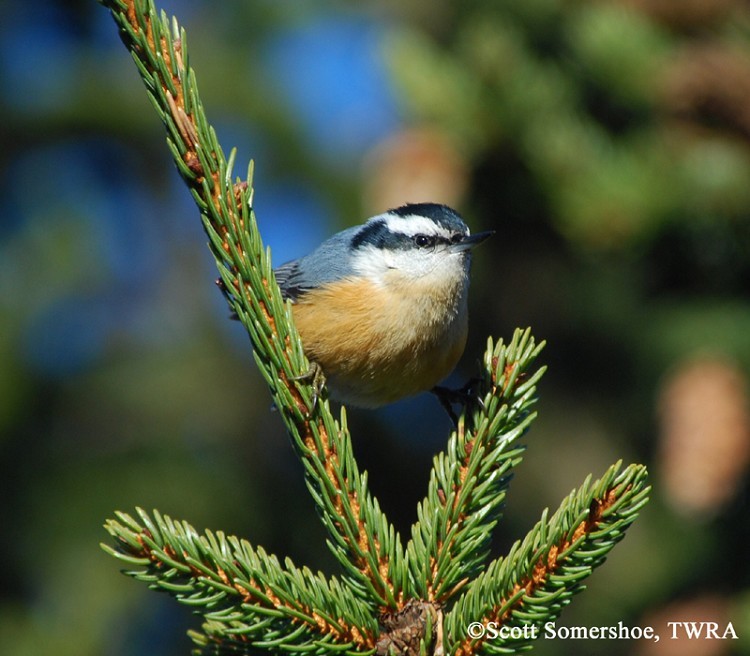 The Red-breasted Nuthatch is more associated with coniferous forests than the more widespread White-breasted Nuthatch.   Both characteristically feed by hitching along tree trunks, often head-down, probing for insects in the bark.

In Tennessee, the Red-breasted Nuthatch is a year-round resident in the high elevation forests of the eastern mountains but is occasionally found statewide in winter when there is an "irruption".   A winter irruption of nuthatches happens when the conifer seed crop is low and northerly breeding birds flood south.

During irruption winters the Red-breasted Nuthatch usually joins mixed-species foraging flocks and readily visits bird feeders. Its range extends from southern Alaska across Canada southward through the western mountains and along the Appalachian Mountains to northern Georgia. It can be found as far south as the Gulf Coast during irruption winters.

Voice: The song is a series of 6 or more nasal yank yank notes, likened to a tinhorn.

Habitat: In Tennessee, they breed in mature, high-elevation coniferous and mixed forests in East Tennessee.

Diet: Insects, spiders, and especially conifer seeds during the winter. They will also visit bird feeders.

Nesting and reproduction: Red-breasted Nuthatches are cavity nesters and are most numerous in high elevation spruce-fir forests in Tennessee, but are also found in hemlock and mixed hemlock-northern hardwood forests.

Incubation: The female incubates the eggs for about 12 days.

Fledging: Both parents feed the young, which fledge when 18 and 21 days old.

Nest: Red-breasted Nuthatches usually excavate their own nest cavities in dead trees, and only occasionally use existing cavities or nest boxes. The cavity is filled with grasses, bark strips, and pine needles, and the cavity entrance is usually smeared with sap.

Status in Tennessee: The Red-breasted Nuthatch is a fairly common year-round resident in the mountains of eastern Tennessee. During irruption winters they can be found statewide. The infestation of the balsam woolly adelgid may be temporarily increasing breeding densities because standing dead fir trees have increased the number of potential nesting sites. Populations may decrease as these dead trees decay.