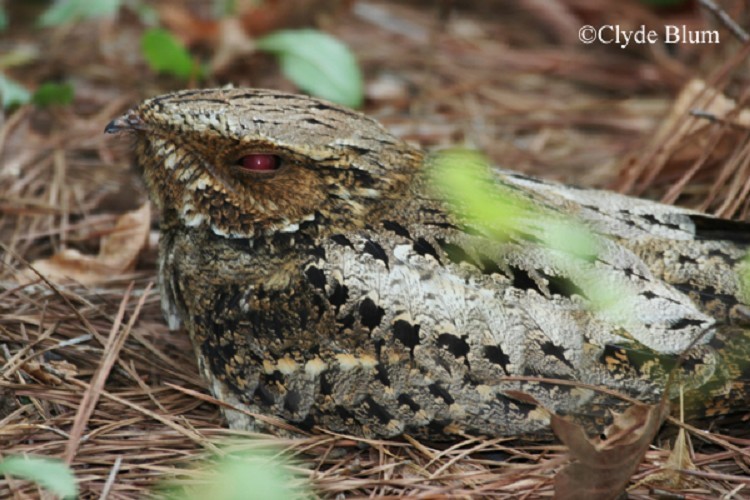 The Chuck-will’s-widow is one of the birds named for its song; however, the first chuck of the 4-syllable song may be difficult to hear at a distance.  This is a well-camouflaged nocturnal species and is much easier to hear than see.

On moonlit nights after dusk and before dawn, from late April into August, it will often sit on a quiet dirt road watching for flying insects. During the day it usually roosts while sitting lengthwise on low limbs of trees.

The Chuck-will's-widow is a migratory species and breeds in the southeastern United States from southern Iowa and eastern Texas eastward to the coast. It winters from southern Florida and central Mexico southward through the Caribbean, Central and South America.

Description: Chuck-will's-widow is extremely well camouflaged in brown, black and gray plumage. It has a large head, a brown throat, and a short, wide bill for catching flying insects. In flight, the wings and tail are long and rounded. The male and female are similar in appearance, but the male has white in tail, and the female does not.

Nesting and reproduction: Females will often nest in the same spot in consecutive years.

Incubation: The female incubates for 20 days.

Fledging: The young are able to run soon after hatching, and the female may move them a short distance from the nest site until they are able to fly at 14 to 16 days.

Nest: There is no nest structure. Eggs are laid on the ground or on dead leaves, in wooded areas with an open understory.

Status in Tennessee: Chuck-will's-widow is a fairly common summer resident of Middle and West Tennessee, and below 1,500 feet in East Tennessee. They arrive in late April and depart in late August. Numbers appear to be declining in the state, as well as rangewide. They are more often heard then seen.

Best places to see in Tennessee: Chuck-will's-widows are most likely to be heard on moonlit nights between late April and late July. They are most likely seen at rest on a quiet dirt road after sunset or just before sunrise.