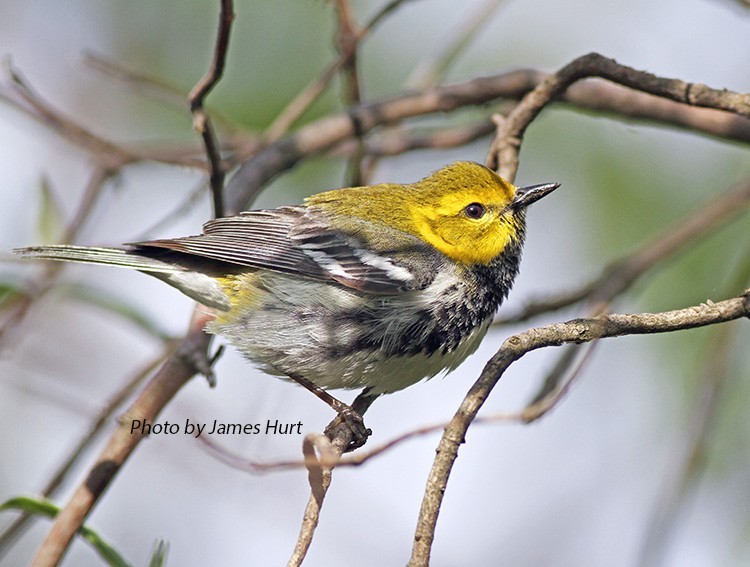 The Black-throated Green Warbler is another species that essentially reaches the southern limit of its breeding range in the eastern mountains of Tennessee.

No other songbird found in the state has the combination of a yellow face, olive-green back, and black across the chest, and the unique song is among the easiest of the warbler songs to recognize in the field.

The male Black-throated Green Warbler sings persistently from high in the canopy during migration and when it is on its territory. The breeding range extends from western Canada to the eastern Atlantic coast, and southward along the Appalachian Mountains . In winter it migrates to Mexico, Central America, the West Indies, and southern Florida.

Description: The male and female share several plumage characteristics: they both have a yellow face, an olive-green crown and back, and two white wing-bars. The male has a black chin, throat, and breast with bold streaks on his sides; the female is similar but her chin and upper throat are white or pale yellow, and the black across the chest may be broken in the front. First-year birds (August-March) look very similar to adult females.

Voice: The male has two songs: zee-zee-zee-zoo-zee and zoo-zee-zoo-zoo-zee. The notes are rather burry, and the last note of both songs ends higher.

Habitat: In the eastern mountains of Tennessee, Black-throated Green Warblers nest at all elevations in the Smoky and Cumberland Mountains. In the Smokies they occur in deciduous, coniferous, and mixed coniferous-deciduous forest; in the Cumberlands they are found primarily in deciduous forest on steep slopes. During migration they can be found in all types of mature and second growth forests.

Diet: Insects, non-hairy caterpillars, and some fruit on migration.

Nesting and reproduction: As with most migratory songbirds, the male arrives on the territory several days before the female. Pairing occurs shortly after she arrives.

Fledging: The male and female feed the young, which leave the nest when 9 to 10 days old.

Nest: Both adults build the tightly woven nest of twigs, grass stems, and bark, and line it with finer materials. The nest is usually placed close to the tree trunk where two or more small branches emerge. Nest heights range from 3 to 65 feet above the ground, but most are 3 to 10 feet high.

Status in Tennessee: The Black-throated Green Warbler is a fairly common migrant across the state and is a locally common summer resident in East Tennessee. Spring migrants are in the state from late March to mid-May, and in the fall from late August to late October. Black-throated Green Warblers nest along the length of the Appalachian Mountains in Tennessee, and locally in the Cumberland Mountains.