Slowing the Spread of Gypsy Moth in Johnson County 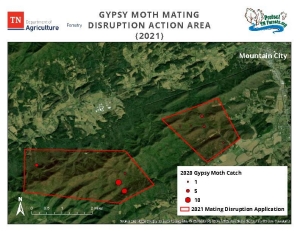 The treatment will take place in a heavily-forested area on Doe Mountain, southwest of Mountain City, to slow the spread of significant gypsy moth populations detected during 2020 surveys.

“The gypsy moth is an exotic, invasive insect pest and represents one of the greatest threats to Tennessee’s forests,” State Forester David Arnold said. “The goal of pheromone treatments is to disrupt mating within gypsy moth populations to halt their population growth.”

Large populations of the gypsy moth can result in widespread tree defoliation and death. Although gypsy moths favor oak species, the pest may thrive on a wide range of other tree hosts and has potential to dramatically affect Tennessee’s forests. The potential financial impact is significant, as gypsy moth can cause drastic losses in timber harvests and lead to great cost for removal of dead trees.

Application of the gypsy moth mating pheromone reduces the ability of the male moth to find and mate with a female. Spray applications of the pheromone are a common method to control gypsy moth populations throughout the U.S. There are no known effects on humans or other organisms. Compared to biological or chemical insecticides, it is the safest alternative for population control.

Additional information can be found on the Gyspy Moth - Slow the Spread Foundation website at www.gmsts.org, and on the Protect TN Forests website protecttnforests.org/gypsy_moth.html.

To submit comments about the treatments to the Tennessee Department of Agriculture, contact Forest Health Program Specialist Cameron Stauder at cameron.stauder@tn.gov or 615-504-5263. Public comments regarding the planned application will be accepted through February 28, 2021.