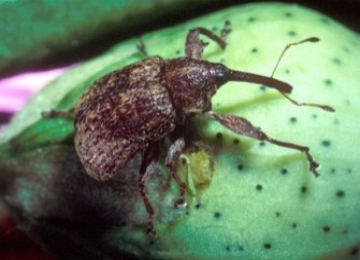 Tennessee’s Boll Weevil Eradication Program (BWEP) is part of a nationwide effort to rid the cotton belt of the most costly insect in the history of American agriculture.  The boll weevil first appeared in the United States in 1892, and by 1950 it was estimated to have cost U.S. cotton producers $10 billion.

BWEP has increased cotton yields while reducing cotton insecticide use by 40 - 90%. The Tennessee Department of Agriculture is proud to serve an role in what has been called one of the most successful industry / government partnerships in history.

Two distinct boll weevil eradication program regions exist in Tennessee. The West Tennessee Region is colored blue and the Middle Tennessee Region is colored green. These two regions designate where cotton is grown and indicate where the program currently operates. Gray counties and all other counties not shown do not currently produce cotton, therefore the program is not active in those counties.

The Middle Tennessee Region was the first to implement the program in 1994. The region consists of all counties that lie wholly east of the Tennessee River, encompassing what is generally known as Middle and East Tennessee. Currently, only Coffee, Franklin, Giles, Grundy, Lawrence, Lincoln and Rutherford counties produce cotton. This region completed the active phase of the program in 1998 and is now in a post-eradication monitoring phase.

The Middle Tennessee Region is serviced through the Southeastern Boll Weevil Eradication Foundation office in Athens, Alabama. Chris Craft is the Officer-in-Charge and may be reached at 256-729-1402 (office) or 256-366-6324 (cell). Lawrence Flanagan is responsible for all boll weevil traps in Middle Tennessee and may be reached at 256-627-1205. The address of the Athens office is 15900 Shaw Rd., Athens, AL 35611.

The West Tennessee Region implemented the program in 1998 in the southern counties, and the northern counties followed suit in 2000. Three formerly distinct regions have now been combined into one. Benton and Decatur are the only two counties in West Tennessee that do not produce cotton.

The West Tennessee Region is serviced through the Southeastern Boll Weevil Eradication Foundation office in Alamo, Tennessee. Randall Crow is the Officer-in Charge and may be reached at 731-696-3775. The address of the Alamo office is 1398 Old Hwy. 412 N, Alamo, TN  38001.