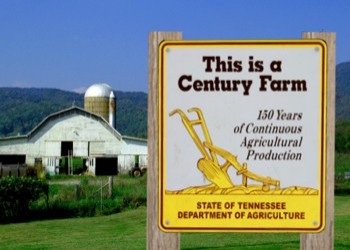 The Tennessee Century Farms Programs, administered by the Center for Historic Preservation (CHP) at Middle Tennessee State University, identifies, documents, and recognizes farms owned by the same family for at least 100 years. To date, nearly 1400 farms have been certified.

The CHP maintains the Century Farm database of information and photographs, most of which is based on applications supplied by the farm families. Tennessee Agriculture: A Century Farms Perspective was published by the Tennessee Department of Agriculture and the Center in 1986. The book-length study includes descriptions of each farm and both color and black and white photographs.

The Century Farms Program established shared interests among the CHP, local historical societies, county extension offices, city and county governments, and chambers of commerce. The bond was strengthened with the traveling exhibit, " Tennessee's Century Farms: Change and Continuity over 200 Years of Farming." Funded by the Center and the Tennessee Humanities Council, it toured the state in 1988-89.

Taking rural preservation work in new directions, Center staff successfully nominated several historic family farms to the National Register of Historic Places. This work paved the way for the innovative Historic Family Farms of Middle Tennessee multiple property nomination. Considered a model for rural preservation, this was the first thematic nomination in the country to deal with historic farmsteads. The CHP, working with the Tennessee Department of Agriculture and the Tennessee Historical Commission, serves as a clearing house of information on the Tennessee Century Farms Program, National Register Documentation of farms, and as national leader in documentation and interpretation of historic family farms.

For more information on the Tennessee Century Farms program, including an application that you may download, and a list by county of Century Farms and their history, visit the Web site at www.tncenturyfarms.org. Related link: MTSU Center for Historic Preservation.