Description: A slender, medium-sized, shiny snake (24.0 to 36.0 inches in length for Eastern; 21.0 to 28.0 for Red; 14.0 to 20.0 for Scarlet Kingsnake) with bright colors or strong patterns.   Eastern Milksnake has a gray or tan body with irregular brownish or reddish-brown, black-bordered blotches down the back; sometimes has a pale "Y" or "V" shaped mark on the back of the head.

Smaller, similar blotches also extend along the lower sides.   Red Milksnake has a white or yellow body with red, reddish-brown, or orange-red, black-bordered blotches on the back.   Small, black markings occur along the sides.

Scarlet Kingsnake has a red snout and alternating bands of red, black, and yellow the length of the body in which red touches black but not yellow.   Belly is marked with black and white checkerboard pattern, except dorsal pattern on Scarlet Kingsnake continues onto belly.

Habitat: Milksnakes are found in a variety of habitats, but generally prefer pine or hardwood forests with rock outcroppings.   They also live under rocks or logs in other habitats including fields, savannahs, agricultural, suburban, wetlands, and forest edges.

Breeding information: Adults breed in the spring. Females choose nest sites under rocks, logs, or rotten stumps that are warm and humid. Females lay a clutch of 2-17 elliptical eggs about 30-40 days after breeding. Eggs typically hatch in late summer.

Status in Tennessee: Milksnakes are secretive, but widespread across the state. Populations are not protected in Tennessee.

Fun Facts:
• Name comes from the old wives tale, which incorrectly thought that these snakes could milk cows.
• Scarlet Kingsnakes are the most strikingly colored snake in our region.

Best places to see in Tennessee: Pine or hardwood forests at Land Between the Lakes or in Unaka Mountains. 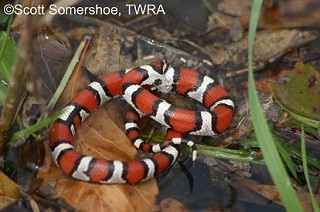