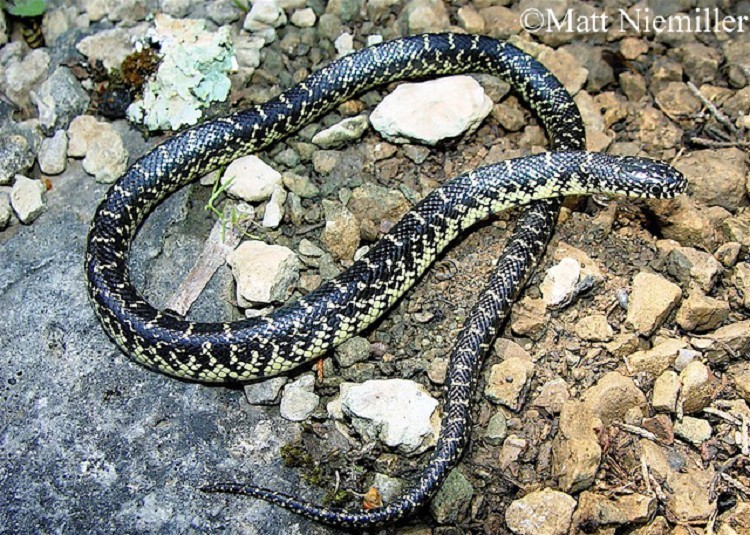 Description: A large, shiny, black constrictor (36.0 to 48.0 inches in length) with varying yellow or white bands or speckles among the subspecies. Eastern Kingsnake has narrow, light yellowish crossbands that create a chainlike pattern.

Habitat: Found in a variety of habitats including forests, fields, shrubby areas, forest edges, urban areas, and edges of wetlands. Common Kingsnakes have a preference for streambanks and wetlands, but are also seen under wood or debris piles, climbing in barns or on stonewalls, and sunning in clearings or on hillsides.

Breeding information: Males seek out females in the spring and occasionally males will combat other males. Females lay 3-29 eggs in moist, rotten logs, stumps, or sawdust piles during the summer. Depending on the incubation temperature eggs hatch in 50-65 days.

Status in Tennessee: Widespread across the state. There is no protection for Common Kingsnake, however some populations appear to be declining due to habitat loss, collection for pet trade, and road fatalities.

Fun Facts:
• Kingsnakes are named for their ability to overcome and consume other snakes, especially venomous ones. Kingsnakes play an important ecological role in controlling these venomous snakes, which can pose a threat to humans.

Best places to see in Tennessee: Most likely to find these secretive snakes hiding under boards, logs, or other debris in a farm setting.