These secretive snakes, which produce a loud hissing noise when encountered, are found across the state except in most of West Tennessee, the Central Basin of Middle Tennessee, and the northern parts of East Tennessee. One subspecies, Northern Pinesnake (P. m. melanoleucus), occurs in Tennessee.

Description: A large, heavy-bodied constrictor (48.0 to 66.0 inches in length) with 4 prefrontal scales (scales between and just in front of eyes) and keeled scales.   Body color is white, yellowish, or light gray with dark brown to reddish blotches on the sides and back that are lighter toward the tail and darker (almost black) near the head.

Blotches toward tail resemble a saddle pattern and may form complete rings on the tail itself.   Belly is whitish to yellow with little to moderate black spotting. Young have paler ground color with a pink or orange tinge.

Diet: Mainly small rodents, but may also prey on ground-nesting birds and their eggs.

Breeding information: Pinesnakes breed in the spring and are oviparous.   Females are known to build communal nests by excavating long chambers in open sandy areas.   Females lay 4-12 large eggs in the nest during the summer.   The young hatch in late summer or fall and can be over 12 inches in length.

Status in Tennessee: The Northern Pinesnake is listed as “Threatened” by TWRA and considered rare and uncommon by Tennessee Department of Environment and Conservation.   Populations are declining due to loss of habitat, decline in habitat quality (fire suppression), and road mortality.

Best places to see in Tennessee: Sandy-soiled pine forests of the Western Highland Rim, particularly Land Between the Lakes, or southeastern Tennessee. 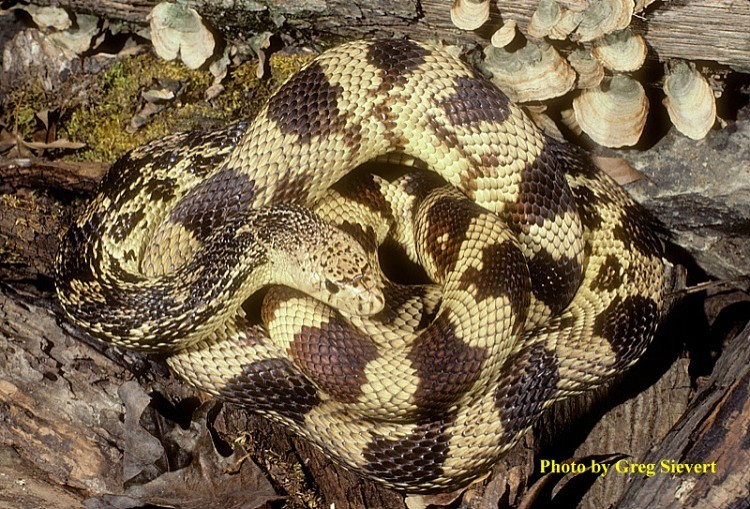