The Meadow Vole, which is very similar in appearance and life history to the Prairie Vole, is found in the eastern part of Tennessee.

Description:
A small, stocky rodent with short legs, large head, and small eyes and ears.  The furred tail is slightly more than twice the length of the hind foot.   Their dorsal fur is dark brown with slightly paler sides.   In winter, the fur is darker gray. Belly fur has silver-tipped hairs.   The feet and tail are darker above and lighter below.

Similar Species:
•Prairie and Woodland Voles and Southern Bog Lemming all have shorter tails.
•Rock Voles have yellow noses.
•Southern Red-backed Vole has a bright reddish band running along the back from head to tail.

Habitat:
They prefer moist, low areas of fields composed of thick grasses and sedges.   Also, they occur in grassy marshes, orchards, road sides, and fields near streams and lakes.   Voles use a system of runways on top of the ground and underground tunnels, where they spend most of their time.  Nests, made of dry grass, can be above or below ground.

Diet:
Meadow Voles are mostly vegetarians eating stems, leaves, roots, tubers, flowers, seeds, and fruits of grasses, sedges, and other plants in the area.  They will occasionally eat insects, snails, and crayfish.

Breeding information:
They may breed almost the entire year, but March through November is the peak season.   The gestation period is 21 days resulting in 1-7 (usually 3-5) young per litter.   The tiny newborns are pink and hairless, but they grow very rapidly.   Weaning occurs at 2-3 weeks and they are adult size after 3 months.

Status in Tennessee:
Meadow Voles are common in their field habitat, and can be abundant in certain areas.

Fun Facts:
•When Meadow Voles are alarmed, they stamp their hind feet like rabbits.
•Voles consume their own weight in food each day.
•Meadow Voles are the most widespread vole in North America. 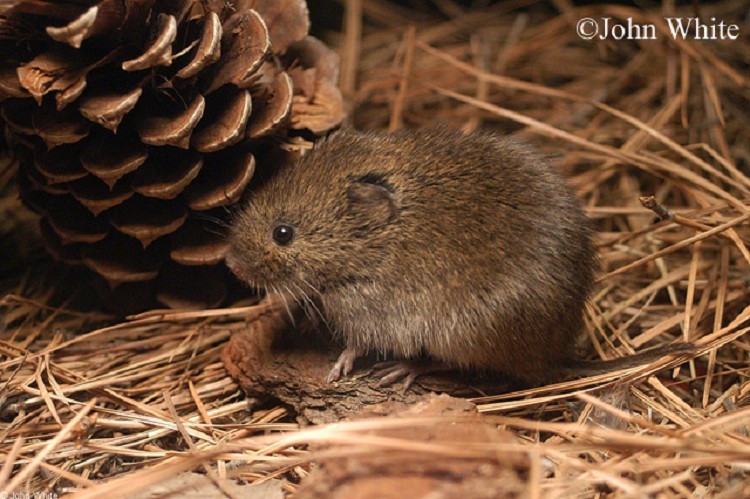