The the striped skunk in Tennessee is the most commone and it occurs state-wide. They are slightly larger and their scent is not as strong as the Eastern Spotted Skunk's.

Description:  A medium-sized, stout-bodied mammal with a small head, short legs, and a prominent, bushy tail.  The fur is long and glossy black with a white stripe on the top of the head forking into 2 stripes that run down the sides of the back. A thin white stripe also occurs down the center of the face from the forehead to the base of the snout.  The eyes are small and the ears are short.  Tail is usually black, but sometimes has a white tip and sides.

Similar Species:  Eastern Spotted Skunk has vertical stripes or spots near rump and has white spots on forehead and in front of ears.

Habitat:  They occur in a variety of habitats in both rural and urban areas, but tend to prefer forest borders, brushy field corners, fencerows, open grassy fields, rocky outcrops, and agricultural fields.   They typically use underground dens which can be in grassy banks, rocky crevices, or along fencerows, although sometimes they use aboveground dens including barns, woodpiles, haystacks, or rock or brush piles.

Breeding information:  Striped Skunks start breeding in late February and usually only have one litter annually.   The gestation period lasts 62-66 days, but sometimes up to 75 days. Litters of 2-16 (usually 4-6) young are born in May or June.   The blind newborns are furless, but have the black and white color pattern on their skin. Eyes open when they are about 3 weeks old.   They will hunt with the mother for the first time around 7 weeks and weaning occurs at 8 weeks.

Status in Tennessee: Striped Skunks may be abundant in certain areas, so there are no conservation concerns. They are hunted and trapped for their pelts in Tennessee.

Fun Facts:
•When threatened, it can spray its scent 10-15 feet; the smell can reach up to a mile away.
•The Great Horned Owl is the chief predator of skunks; the skunk's odor does not seem to deter them.

Best places to see in Tennessee: Edges, corners, and fencerows of fields. 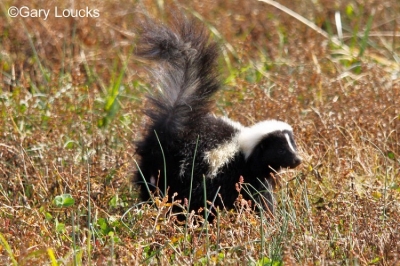