Of the two skunks occurring in Tennessee, the Eastern Spotted Skunk is slightly smaller and less common.   They are found in the eastern and middle parts of the state.

Description: A medium-sized, stout-bodied mammal with a small head, short legs, and a prominent, bushy tail.   The long, glossy, black fur has white stripes along the neck, back, and sides to mid-body.  Behind these are vertical white stripes or broken stripes (which appear as spots).   White spots also occur on the forehead and in front of each ear.   The eyes are small and the ears are short. Tail is black, but sometimes has a white tip.

Similar Species:  Striped Skunk does not have vertical stripes or spots near rump, and lacks white spots on forehead and in front of ears.

Habitat:  Occurs around rocky, dense habitat, including fencerows, shrubby field borders, and farmland.   Underground dens can be in grassy banks, rocky crevices, or along fencerows, while aboveground dens can include barns, woodpiles, haystacks, or rock or brush piles.

Breeding information:  Breeding occurs in late winter when males wander in search of females.   Most females produce a single litter a year, but some produce a second in late summer.   Litters range from 2-9 (usually 5) young.   The blind, hairless newborns have the black and white color pattern on their skin.   Their eyes open at about 1 month old when they start to walk.   Weaning occurs near 2 months old.

Status in Tennessee:  Eastern Spotted Skunks are uncommon, but not of conservation concern.  They are hunted and trapped for their pelts in Tennessee.

•The Eastern Spotted Skunk scent is stronger than the similar Striped Skunk.

Best places to see in Tennessee: Farms or rocky habitat. 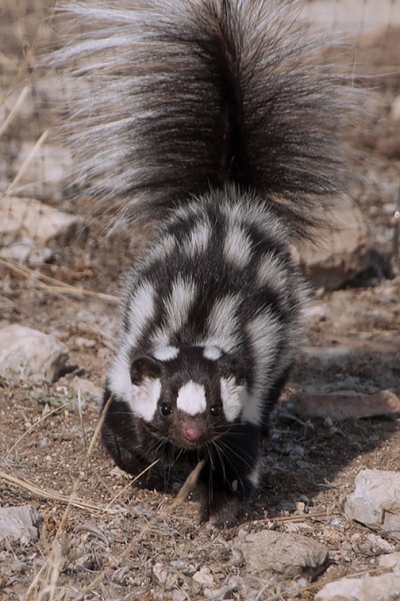 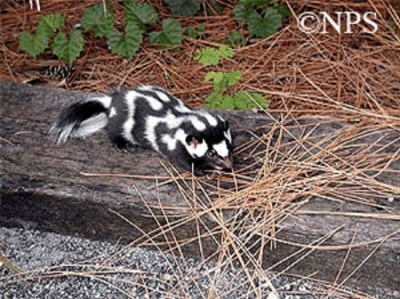