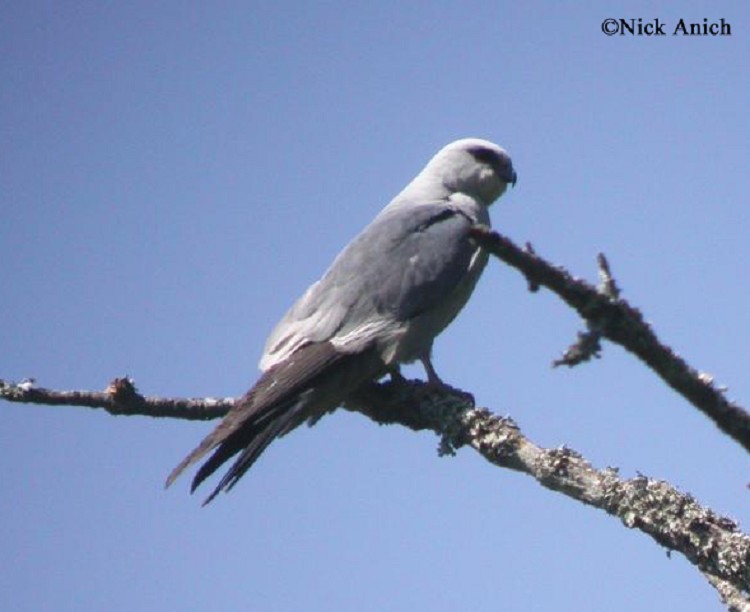 The Mississippi Kite is an extremely graceful, long-winged raptor found in far West Tennessee.  It is unusual among Tennessee's raptors in that it mostly feeds on flying insects, and flocks of 15 or more kites may gather where food is abundant.

It can be found in the state from late April through early September soaring over woodlands, bottomland forests, and some urban and suburban neighborhoods. The breeding range extends across the southern U.S. from Arizona to northern Florida and up the Mississippi River to southwestern Illinois. The Mississippi Kite migrates to South America during the non-breeding season.

Description: The Mississippi Kite is falcon-like in shape with long, narrow, pointed wings, and a long tail. The head is pear gray, the body is a darker gray, and there is a pale patch on the rear edge of the wing when seen from above.

Habitat: In Tennessee, Mississippi Kites are found in mature woodlands and bottomland forests near the Mississippi River and other wooded western rivers, and even some urban and suburban neighborhoods.

Nesting and reproduction: In the western part of the range, Mississippi Kites may nest colonially. This behavior has not been recorded in Tennessee.

Incubation: Both adults incubate for 29 to 31 days.

Fledging: Both parents feed the young, which leave the nest in about 34 days, and fly well at about 7 weeks.

Nest: Mississippi Kites build a substantial, crow-sized nest near the top of a tall tree.

Status in Tennessee: The Mississippi Kite is a fairly common summer resident in West Tennessee and a rare migrant in the Middle and Eastern parts of the state. They arrive in late April and depart by early September.   Numbers appear to be increasing.

Best places to see in Tennessee: Forested rivers and wooded swamps in the counties along the Mississippi River, and Hatchie NWR.