The Greater White-fronted Goose breeds in the arctic tundra of North America, Siberia and Greenland giving it one of the largest distributions of any goose in the world.  In North America, birds spend the winter along the west coast from southern Canada to northern Mexico, and inland along the Mississippi River to central Mexico.

They often forms flocks with other species of geese. Greater White-fronted Geese are found in Tennessee from early November to late May, primarily in West and Middle Tennessee.

Description: The Greater White-fronted Goose has a gray-brown body with white on the forehead and at the base of the pinkish bill. The belly is speckled with black, the tail is dark with a white tip, and the rump is white.

Voice: The call is a distinctive, quick, high-pitched 2 or 3-syllable laugh. In flight, the calls of flocks sound higher, clearer, and the syllables more rapid than other geese.

Nesting and reproduction: The Greater White-fronted Goose has never been known to nest in Tennessee.

Status in Tennessee: This goose is a rare migrant and winter resident primarily in West and Middle Tennessee. They usually arrive in the state in early November and depart by late May.

Best places to see in Tennessee: Most often found with other geese at state and federal wildlife refuges, especially Reelfoot Lake and counties along the Mississippi River. Often seen at Britton Ford Unit of Tennessee NWR near Big Sandy. 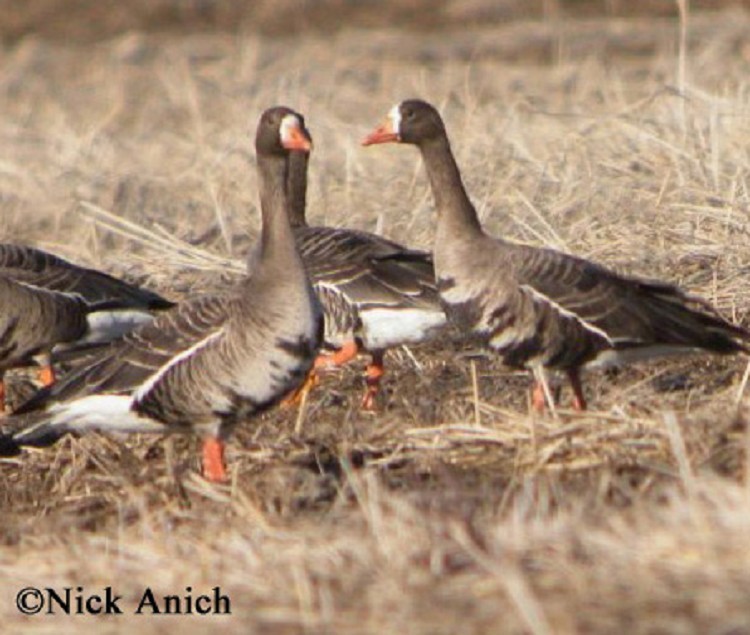