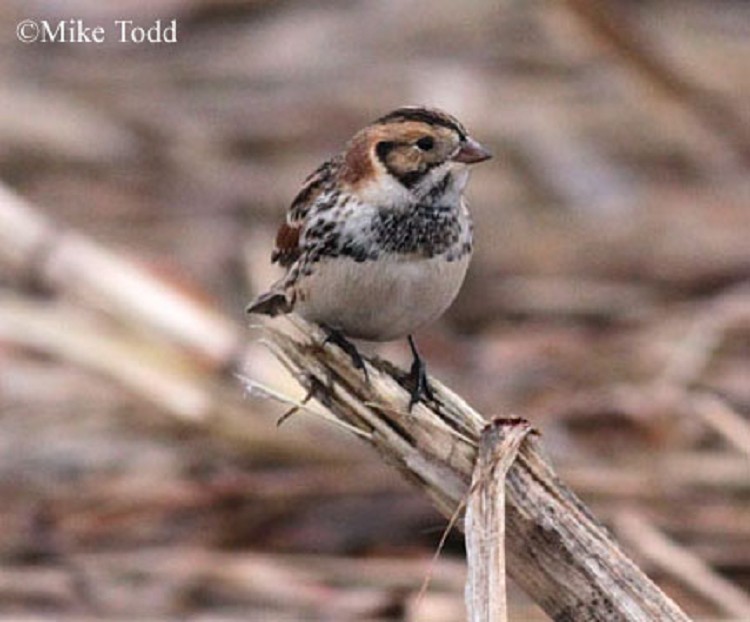 The Lapland Longspur is a rare, but regular migrant and winter resident across the state, however, it is more likely to be encountered in West Tennessee from Reelfoot Lake to Memphis than elsewhere.

This Arctic tundra breeding bird is actually quite abundant, breeding across Eurasia, Greenland, and North America. In North America, huge numbers winter across the Great Plains from southern Canada to northern Texas. Lapland Longspur usually arrives in Tennessee by mid-November and departs by early May.

Description: This medium-sized, sparrow-like bird has a short, thick, pointed bill, a rusty patch in the wing, white outer tail feathers, is brown-streaked above, has streaked sides, and a white belly. In non-breeding plumage (August-March) the face is patterned buff and brown, with a buffy-rust nape, and a dark breast-band; breeding males (March-August) have a black face and chest, a yellowish eye-stripe, and a rusty nape.

Voice: The call is a husky, whistled tleew, similar to a Snow Bunting.

Habitat: In Tennessee, it is usually found in open areas, especially plowed, fallow, or stubble agricultural fields, and along roadsides.

Nesting and reproduction: There are no records of Lapland Longspur nesting in Tennessee.

Status in Tennessee: The Lapland Longspur is a regular, but rare migrant and winter resident across the state, but more likely to be seen in the western half of the state, especially from Reelfoot Lake to Memphis. It usually arrives by mid-November and departs by early May.

Best place to see in Tennessee: Short-stubble, or plowed agricultural fields along the Mississippi River from Reelfoot Lake to Memphis.