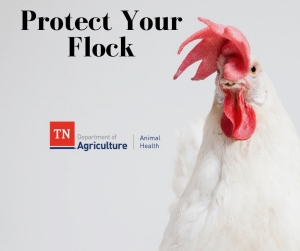 NASHVILLE – The state veterinarian is announcing that commercial poultry farms in Obion County that were part of a control zone to monitor for Highly Pathogenic Avian Influenza (HPAI) are no longer restricted.

“Despite numerous detections across the U.S. this year, HPAI has not been detected in a domestic Tennessee poultry flock to this point and we aim to keep it that way,” State Veterinarian Dr. Samantha Beaty said. “It’s critical that poultry owners remain vigilant of their flocks and immediately report sudden illness or death. HPAI is easily spread among birds and is deadly to domesticated poultry.”

Last month a commercial chicken operation on the state line in Fulton County, Ky. experienced an outbreak of HPAI. The 10-kilometer controlled surveillance zone around the premises included a portion of Obion County, Tenn. Because of this, international trading partners implemented trade restrictions affecting the Tennessee poultry industry. Animal Health Division staff in Tennessee and Kentucky coordinated an emergency response to eradicate the disease and help restore animal health and trade.

This strain of avian influenza is not known to be a human health risk or a food safety concern. Poultry and eggs are safe to eat when handled and cooked properly. However, out of an abundance of caution, infected birds are not allowed to enter the food chain.

So far, 17 states have reported incidents of HPAI in commercial and backyard poultry flocks this year. You can find a list on the USDA Animal and Health Inspection Service (APHIS) website here: www.aphis.usda.gov/aphis/ourfocus/animalhealth/animal-disease-information/avian/avian-influenza/hpai-2022/2022-hpai-commercial-backyard-flocks.  APHIS also has materials about biosecurity, including videos, checklists, and a toolkit available as part of its Defend The Flock program.

Anyone involved with poultry production from a small backyard to a large commercial producer should review their biosecurity and housing activities to ensure the health of their birds. The state veterinarian recommends the following:

In Tennessee, more than 600 family farms contribute to the commercial poultry industry. The state is a leader for primary breeders with an estimated 50 percent of the chicken consumed globally tracing back to Tennessee operations. Broiler chickens are among the state's top commodities, generating $376.2 million in cash receipts in 2021.