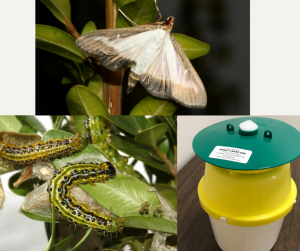 NASHVILLE – The U.S. Department of Agriculture’s Animal and Plant Health Inspection Service (APHIS) has confirmed the presence of box tree moth, Cydalima perspectalis, in the United States and Tennessee is a state that may have received infested boxwood plants.

The Tennessee Department of Agriculture (TDA) was notified today that boxwoods shipped to a distribution center in Memphis from Ontario, Canada between August 2020 and April 2021, may have been infested with box tree moths. APHIS believes six other states may be affected.

“We are monitoring the box tree moth with traps in the Memphis area,” Commissioner Charlie Hatcher, D.V.M. said. “Tennessee imports boxwoods from Canada and once the pest was detected in Canada last year, TDA placed traps in West Tennessee and in other high-risk areas. Fortunately, there have been no box tree moths detected since that time. Based on the latest information from APHIS, we will place additional traps in West Tennessee.”

The box tree moth feeds mostly on boxwoods and can defoliate and potentially kill boxwood plants if left unchecked. Once the leaves are gone, larvae consume the bark, leading to plant death. Signs of infestation include silky webbing and possibly caterpillars located deep inside of the plants.

Box tree moth caterpillars are green and yellow with white, yellow, and black stripes and black spots. Adult box tree moth has two color patterns. The most common has white wings with dark brown borders, while the dark pattern has solid brown wings with a white streak or spot on each forewing. Both have a distinctive white dot or mark in the middle of each forewing.

Boxwoods appear in many landscapes in Tennessee due to their year-round green foliage and adaptability to changing weather. TDA recommends anyone who purchased boxwood plants within the last few months to inspect their plants for signs of the pest. If you suspect your boxwood plant has been infested, contact TDA’s Plant Certification Section at 615-837-5137.