Description: A medium-sized turtle (males 3.5 to 6.5 inches; females 5.0 to 10.25 inches in length) with a distinct large, yellowish rectangular or oval patch behind each eye.   Carapace (upper shell) is olive-green to brown with dark smudges on the scutes (plates); covered with intricate yellow lines, resembling roads or waterways on a map.

Along the backbone of the shell is a blunt keel and the back end of the shell is serrated.   Head, neck, and limbs are dark green with thin yellow lines. Yellow spots also occur below each eye and below that on the lower jaw.   Plastron is dull yellow with grayish color along the margins of the scutes.   Eyes are bright yellow with a black horizontal slit.

Diet: Males are mostly carnivorous while females are more herbivorous.

Breeding information: Courtship and mating occur in the water during the spring. Females lay 6-15 eggs during the summer, usually on sandbars or sandy soil.   Hatchlings emerge in later summer or early fall, or they overwinter in the nest.

Status in Tennessee: Fairly common in the Mississippi and Tennessee Rivers.

Best places to see in Tennessee: Main channels and tributaries of the Mississippi and Tennessee Rivers. 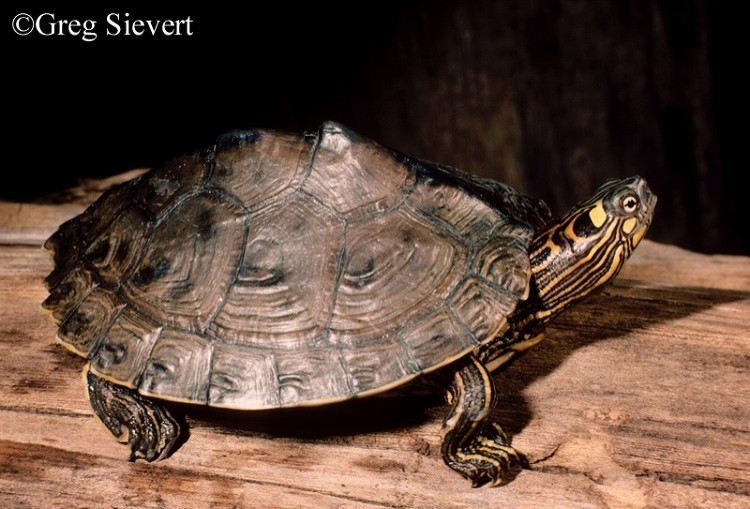