The Eastern Musk Turtle, also known as the “Stinkpot,” occurs from the Mississippi River to the Unaka Mountains; absent from many central and northeastern counties.

Description: A small, aquatic, dark turtle (2.0 to 4.5 inches in length) with a smooth, domed-looking shell  . Carapace (upper shell) is long and varies from light olive-brown to nearly black.   The sides of the head have 2 distinct light-colored stripes; and barbels (fleshy nodules) occur on chin and neck.   The small plastron (lower shell) is yellow or yellowish-brown and has a single horizontal hinge towards the front.   Males have a longer and thicker tail.   Young have a prominent keel running down the center of the carapace.

Similar Species: Stripe-necked Musk Turtle has dark, prominent stripes on the side of the head and barbels on chin only.   Eastern Mud Turtle has 2 hinges on the plastron – one in the front and one in the rear.

Breeding information: Adults court and breed in spring and summer. Females lay up to 6 clutches per year producing 2-5 small, white eggs per clutch.   Females do not dig their own nests, but rather place eggs in stump holes, under dead leaves, or in rotten logs. Eggs hatch after 2 to 3 months.

Status in Tennessee: Appears to be common in its known habitats across Tennessee.

Best places to see in Tennessee: Shallow streams and rivers in the Tennessee River system and Mississippi River coastal plain. 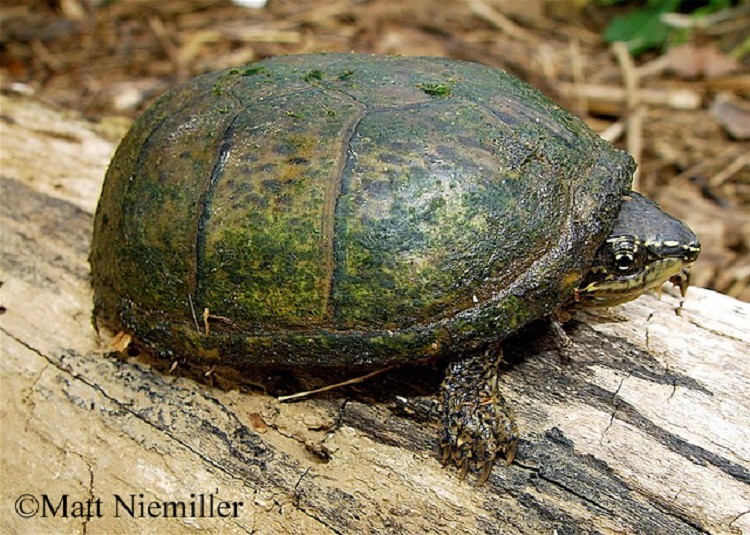