The Eastern Mud Turtle is a semi-aquatic turtle and occurs across Tennessee, except for the upper Cumberland and Tennessee River drainages.

Description: A small, drab turtle (2.75 to 4.0 inches in length) with a smooth, oval, dark brown (to almost black) shell.

The large double-hinged plastron (lower shell) is yellowish-brown with dark markings.   The bridge between plastron and carapace (upper shell) is broad.

Head has some yellow streaking.   Males have concaved plastrons and longer, thicker tails. Young have plastrons with orange-red spots.

Similar Species: Eastern Musk Turtle has small plastron with 1 hinge and 2 light stripes on the head.

Habitat: Found in calm, shallow waters such as wetlands, ponds, ditches, and backwaters of rivers and streams. Prefers water with dense aquatic vegetation.

Breeding information: Adults court and mate in the spring.  Females lay several clutches of 2-5 brittle eggs in shallow, well-drained nests throughout the summer.   Eggs hatch in 90-100 days, but hatchlings remain in the nest until winter or spring of the next year.

Status in Tennessee: Appears common in parts of its range. Because of its drab colors, the Eastern Mud Turtle has not been exploited for the pet trade. 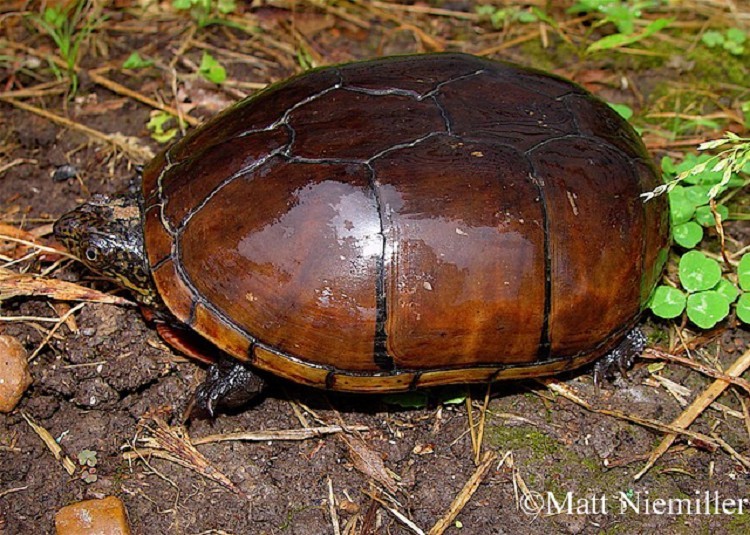