Description: A large, heavy-bodied watersnake (24.0 to 42.0 inches in length) which has keeled scales and is highly variable in color.   Body may be grayish to brown (almost black in older specimens) with dark brown to reddish-brown crossbands on the front third of the body becoming broken into 3 rows of alternating blotches.

Midland subspecies has a yellow belly distinctly marked with 2 rows of half moons, while the half moon markings in the Common subspecies are broken up or not clear.   Young are similar, but more boldly patterned.

Similar Species: Broad-banded Watersnake has crossbands running entire length of body and a light, black line running from the corner of the eye diagonally to the corner of the mouth. Cottonmouths are darker and more heavy-bodied with a facial pit between eye and nostril.

Habitat: This habitat generalist is found in every type of water body, but prefers quiet waters. Northern Watersnakes occur in ponds, lakes, rivers, streams, sloughs, wetlands, and temporary water pools. Frequently found around edges of ponds or lakes, basking on rocks, or on vegetation overhanging water.

Status in Tennessee: Populations are widespread and abundant. Northern Watersnakes are frequently killed by people who mistakenly think they are Cottonmouths or Copperheads. Also, they are vulnerable to polluted waters. 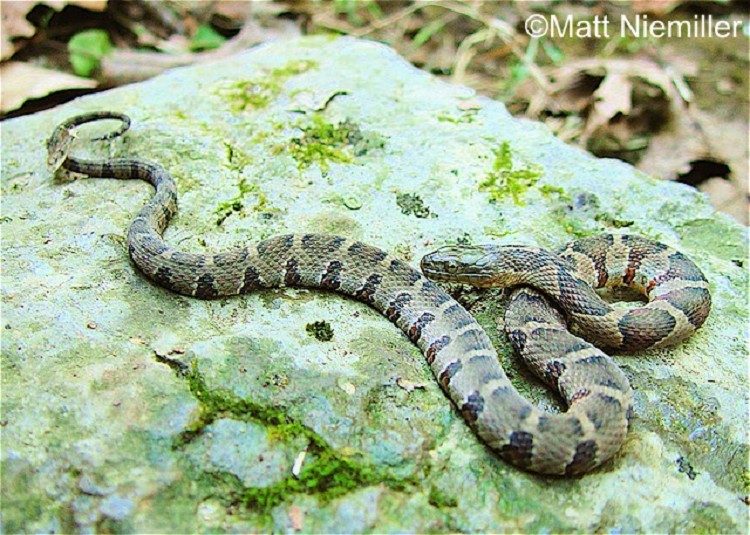