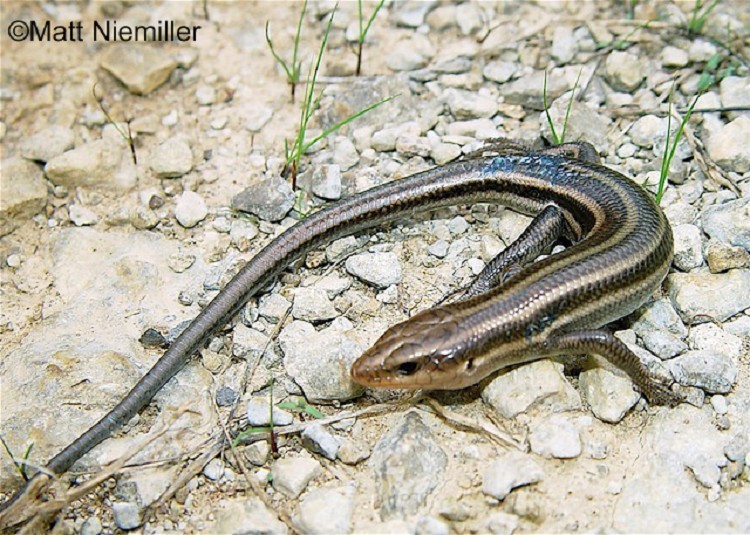 Description: A moderately large, shiny lizard (5.5 to 8.5 inches in length) with highly variable color pattern.   Body color is usually brown or black with 5 white or yellowish stripes extending onto the tail.   Middle stripe is often thinner than others.   Adult males have brown or bronze backs and often lose the middle stripe; they also have reddish or orange coloration on the head during the breeding season.   Adult females typically are more faded, but retain stripes and coloration. Juveniles have a bright blue tail and distinct stripes.

Similar Species: Easily confused with Broad-headed Skink and Common Five-lined Skink; positive identification can only be assured by examination of the scales.   Broad-headed Skinks have 5 labial scales (along the upper lip between the nose and eye) and Common Five-lined Skinks have enlarged middle row of scales under the tail.

Diet: Mainly wide variety of insects, spiders, and other invertebrates.

Breeding information: Mating occurs in the spring.   Females lay 3-8 eggs under rotten logs, stumps, rocks, or leaf litter during the spring or early summer.   Females remain with the eggs during the 2-8 week incubation period.

Best places to see in Tennessee: Dry wooded sites with an abundance of fallen trees and limbs.