The Eastern Chipmunk is a small, ground-dwelling squirrels, which are frequently observed with full cheek pouches, occur all across Tennessee.

Description:
The Chipmunk is mostly reddish-brown, with five lengthwise dark brown to blackish stripes running from shoulders to rump, each with white fur down the middle.   The furry tail, which is longer than the body, appears somewhat flattened.   Fur is white to buff underneath, and feet are tannish. Pouches in the cheeks are used to store food.   Males molt in April-May and August-September, while females only molt in June.   Summer coat is more colorful than in winter.

Habitat:
Chipmunks generally choose forest borders as places to make their shallow burrows, often near brush piles, stone heaps, and decaying logs. These burrows have openings of two inches in diameter, and a main tunnel that leads to a chamber they use to store food and use as a nest.

Diet:
Chipmunks main foods are nuts, which include acorns, hickory, beech, and walnuts. Fruits and mushrooms are also eaten, but not stored, as are animal prey such as earthworms, insects and larvae, amphibians, and even small birds and bird eggs.

Breeding information:
Females often have two litters a year, usually between April and May, and July and August, each averaging 4-5 young. Gestation period is 31 days, and young first appear above ground in 5-6 weeks. Sexual maturity occurs in about one year.

Fun Facts:
•During peak hoarding periods in the fall, Chipmunks can gather and store as much as 165 acorns per day! 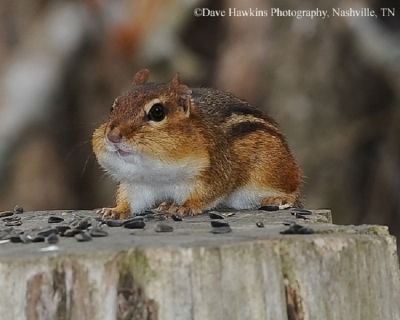