Description: A small tree squirrel with a very soft brownish-gray fur coat and white belly hairs (gray at the base). They have large black eyes and their tail is flattened. A distinctive loose fold of skin, the flying membrane, occurs on each side of the body extending from the outside of the wrist on the front leg to the ankle on the hind leg. A spur, made of cartilage, extends outward from the front wrists to support the flying membrane. There are 4 clawed toes on the front foot and 5 on the back.

Similar Species: The Southern Flying Squirrel is smaller and belly hairs are all white.

Habitat: Occurs in both coniferous and deciduous moist forests at higher elevations (usually greater than 4500 feet), especially at the transition zone between the two. They also prefer mature trees that are widely spaced and a large number of dead snags.

Breeding information: Northern Flying Squirrels generally breed only once a year, in late winter to early spring.   Females usually choose nesting sites in tree cavities, often a woodpecker hole, and line it with birch bark, moss, and grass.   Females are pregnant from 37-42 days and produce 1-6 young (average 3) per litter.   Young leave the nest after 40 days and are weaned by 2 months.

Status in Tennessee: Glaucomys sabrinus coloratus is a federally and state listed endangered subspecies.  Their small populations are vulnerable to habitat destruction, fragmentation, and pollution.

Fun Facts:
Flying squirrels, which don't actually fly, can use their tail as a rudder to turn or change its descent angle while gliding from tree to tree. 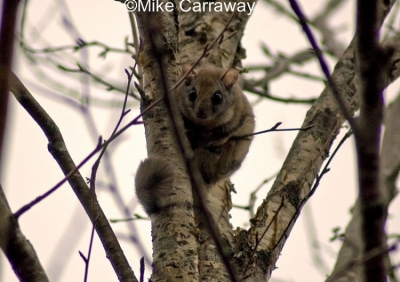