Fishers originally occurred in northeastern Tennessee more than 200 years ago, but were extirpated by intensive trapping and logging.   These carnivores, which are members of the musk-scented weasel family, were re-introduced into Cumberland County in 2002.

Description:  A medium-sized mammal with long, thin body; short legs with retractable claws; broad head with a pointed snout; short, rounded ears; and a bushy tail. The fur is long and variable in color, but is usually dark brown above with black legs, rump, and tail. Face, neck, and shoulders have a grayish cast to them. Belly is brown with white patches on the chest and genital region. Males are larger than females.

Similar Species:  American Mink is much smaller and has a white chin patch.

Habitat:  Fishers prefer large expanses of undisturbed, mature forest habitat. They will use coniferous, deciduous, or mixed forests as long as it has high canopy closure. Hollow trees or rock crevices are typically used for dens.

Breeding information:  Fishers breed in later winter to early spring. Gestation lasts 11-12 months due to the suspended development of the embryos after fertilization. Litters range from 1-6 (average 3) young. They are born blind and naked and weigh about 1½ ounces. The young are weaned at 8-10 weeks and can hunt for themselves by 4 months.

Status in Tennessee:  Fishers are currently not ranked due to insufficient data about their population trend.

Fun Facts:
•Fishers are excellent swimmers and climbers due to their long, slim bodies and short legs, which make them very swift and nimble.
•Their name is misleading, they do not hunt fish.
•When alarmed, Fishers will arch their backs, like a cat, and hiss, growl, snarl, and spit. 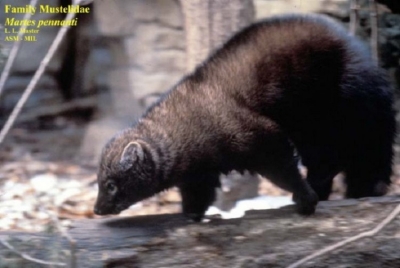