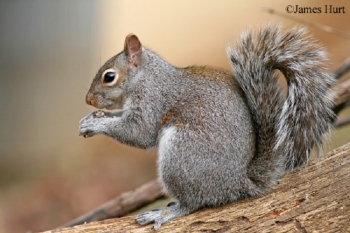 Eastern Gray Squirrels, which occur state-wide, are the most common squirrels in yards and parks.

The hair is much longer on the bushy tail, which is pale gray to white.   The often conspicuous eye ring is white to buff.

The hind feet have five complete digits, while the forefeet lack a complete thumb.   They are sexually monomorphic (sexes alike).

Similar Species: The Eastern Fox Squirrel is larger, reddish underneath, and has a more square face.

Diet: Though considered omnivores, these squirrels main foods are the nuts, flowers, and bulbs of oaks, hickory, elm, walnut, and field corn.

During late spring and through the summer, they rely heavily on fruits and various fungus species, insect larvae, and occasionally young birds and eggs.

Breeding information: Competition among males to breed with a single female is commonplace, and breeding occurs usually twice a year: December-February and May-June.

The average age of sexual maturity in females is one year, 11 months for males.

The gestation period is 44 days, at which point females give birth to an average of 2-4 naked, altricial young, though litters as large as 8 have occurred.

Young are weaned in 7-10 weeks and are an adult in size by 9 months.

Status in Tennessee: A common game species, so no conservation concerns.

• Red-tailed hawks are the main predator of Eastern Gray Squirrels here in Tennessee.

• Eastern Gray Squirrels can have mass migrations from one region to another, usually due to a nut crop failure or pressure from a high population.