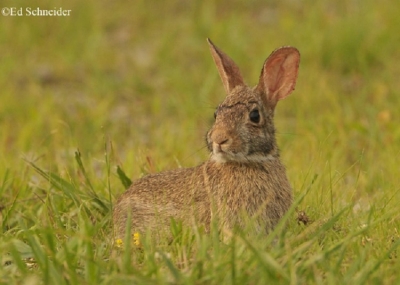 The Eastern Cottontail is is the most common and widespread rabbit in North America, and occurs across the entire state of Tennessee.

Description: A medium-sized mammal with soft fur, large hind legs, long ears, and a fluffy tail. Grayish brown to reddish upperparts contrast with generally whitish fur underneath. The tail is brown, but white underneath; when the rabbit runs, it lifts the tail to show this white, which is where we get the common name.

Diet:  Almost entirely herbivorous. Approximately half of the rabbits diet consists of grasses in summer, and rounded out by both white and red clover, wild strawberries, and garden vegetables. In the winter, the diet changes to more woody plants, such as sumac, sassafras, flowering dogwood, and berries and waste corn when the ground is not snow-covered.

Breeding information:  Breeding usually starts to occurs in late winter, and lasts through September. Females can have up to 7 litters a year, but usually average 3-4. With pregnancy lasting from 26-28 days, this means does are often nursing and pregnant by late May. Litters average 5 young, but can have as many as 12. Since sexual maturity occurs in 2 to 3 months, approximately 25% of young are born to juveniles.

Status in Tennessee:  Common in preferred habitat and sometimes abundant in some locations.

Fun Facts:  An interesting mating ritual occurs between breeding pairs, in which the doe is chased by the buck until she turns around to face him. She then spars with her front feet, until they crouch facing each other. At this point, one of the animals leaps 2 feet in the air;  this process (usually at night) is repeated a number of times prior to copulation.

Best places to see in Tennessee:  Most anywhere there are woods with adjoining fields or other open areas.

Rabbit hemorrhagic disease (RHD) is an emerging wildlife disease caused by rabbit hemorrhagic disease virus type 2 (RHDV2). The disease is highly infectious and has a high mortality rate. RHDV2 affects lagomorphs, members of the Order Lagomorpha, which includes domestic and wild rabbits, pikas, and hares. Susceptible native Tennessee wildlife species include the Eastern Cottontail, Appalachian Cottontail, and Swamp Rabbit. Currently, RHDV2 has not been documented to affect humans or any other animal species.  Read More...