The Swamp Rabbit is generally found near water, as its name suggests, and is an excellent swimmer. It occurs in western Tennessee and some parts of middle Tennessee. It is the largest cottontail in the southeast and it is also known as a "cane-cutter."

Description:  A medium-sized mammal with soft fur, large hind legs, rounded ears, and a fluffy white tail.  The short, coarse fur is brownish-gray, often with a yellowish hue, mottled with black. It is white underneath, except for the buffy gray chest.   The back of the neck is rust-colored and the hind feet are rusty brown on top, with large toenails.

Breeding information:  Breeding mainly occurs from February through July, rarely into August and September.   Up to 5 litters are produced annually, each averaging 3 to 4 young. Gestation averages 38 days.   The young are born well furred, but blind.   The mother nurses the young even after they leave the nest (12-15 days).

Status in Tennessee:  Swamp Rabbits are not considered threatened in Tennessee, and are sometimes common in suitable habitat.

Fun Facts:
•When threatened, Swamp Rabbits will dash for the nearest body of water, dive in, and only leave their noses visible.

•When caught in flooded forests with no dry ground available, they will sit on floating logs and trees and wait for floodwaters to recede. They will swim to other logs and feed, but can be approached closely in kayaks or canoes when stranded on floating logs.

Best places to see in Tennessee:  West Tennessee in lowland and cypress swamps, and along river banks and tributaries of
the Mississippi river. 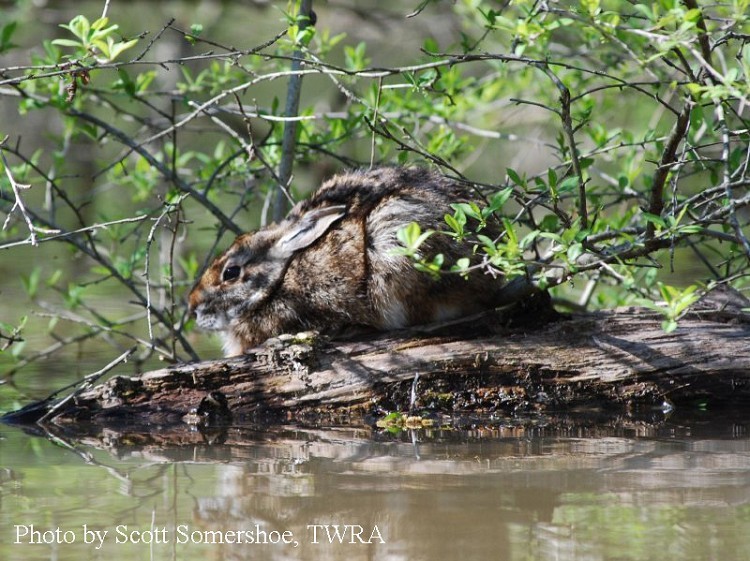 Rabbit hemorrhagic disease (RHD) is an emerging wildlife disease caused by rabbit hemorrhagic disease virus type 2 (RHDV2). The disease is highly infectious and has a high mortality rate. RHDV2 affects lagomorphs, members of the Order Lagomorpha, which includes domestic and wild rabbits, pikas, and hares. Susceptible native Tennessee wildlife species include the Eastern Cottontail, Appalachian Cottontail, and Swamp Rabbit. Currently, RHDV2 has not been documented to affect humans or any other animal species.  Read More...