Tri-colored Bats, which are the most common bats in Tennessee, occur in more caves in eastern North America than any other bat species.   They usually hang singly in the warmer parts of the cave.   Their distribution is state-wide.

Description:  A small bat with fluffy, reddish-brown to yellowish-brown or gray fur.   The individual hairs, when parted, have 3 separate colors: dark gray at the base, light yellowish middle band, and dark brown tips.   Skin over the forearm bones are reddish contrasting with the black wing membranes.   The tail membrane is sparsely furred on the third nearest the body.   Long, thin ears are bare with slightly rounded tips.   Calcar is not keeled.

Similar Species: Myotis bats have tragus's which are longer and thinner. Big Brown Bat and Evening Bat have hairs that are 2-toned instead of 3 when parted.

Diet: Mostly forages over streams and forest edges feeding on small insects, such as flies, moths, beetles, leafhoppers and other flying insects.

Breeding information: Mating occurs in the fall, but the fertilization is delayed until spring as with most bats.   Tri-colored Bats usually deliver twins in late spring or early summer.   The young are pink, naked, and blind when born, and they can make a clicking noise that may help the mother keep track of them.  They can fly at about 4 weeks old and are independent by 5 weeks.

Status in Tennessee: This is the most common bat in the state and occurs here year round.

Fun Facts:
•Often covered with water droplets in hibernation, which sparkle like diamonds.
•Tri-colored Bats are weak fliers and are often mistaken for moths. 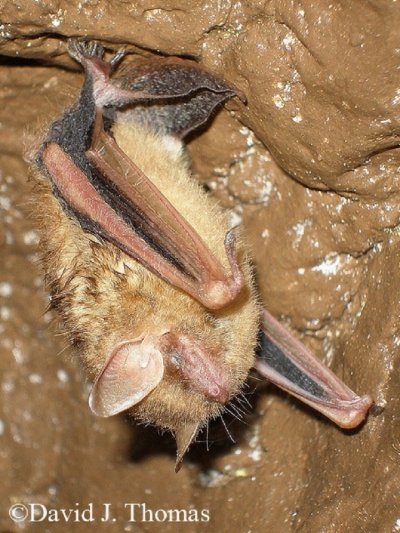