The name of this bat, Evening Bat,  refers to their usual foraging time, which is during the last half hour before daylight.   They typically fly slow and high (40 to 75 feet) in the evening before descending to a lower flight at night.   These bats occur state-wide in Tennessee.

Description:
A small bat with thick, dark brown fur and black ears, muzzle, and wing and tail membranes.   Fur color on the back, when parted, shows black bases and dark brown outer portions.  The under parts tend to be paler and more buff in color.   They have thick, rounded ears, which are almost naked; tragus is short, rounded, and curved slightly forward.   The wing and tail membranes are thick and almost naked.

Similar Species:
Big Brown Bat is much larger. Tri-colored Bats have hairs that are 3-toned instead of 2 when parted. Myotis bats have tragus's which are straighter, longer, and thinner.

Habitat:
Evening Bats mostly use tree cavities during the spring and summer months, but they will use buildings and other man-made structures such as attics and barns.   They almost never enter caves.   Winter habitat is unknown, but accumulations of fat reserves suggest they migrate or hibernate. Nursery colonies are formed under the bark of dead trees or in houses.

Diet:
Consumes a variety of flying insects, including beetles, moths, flies, and leafhoppers.

Breeding information:
Like most of Tennessee's bat species, breeding occurs in the fall, and delayed fertilization allows for the birth of 1-2 (usually 2) young in late May through June.   The newborn are pink except for dark pigmentation on the feet, membranes, ears, and lips.   They begin to fly after 3 weeks, but continue to nurse until 6-9 weeks old.

Status in Tennessee:
Although the Evening Bat is uncommon throughout much of its range, it is common in Tennessee. They are not listed for protection.

Fun Facts:
•A colony of 100 Evening Bats can consume over 1.25 million insects in a season.
•The only bat in Tennessee with 30 teeth, others have 32 or more.

Best places to see in Tennessee:
In hollow trees or buildings during warmer months. 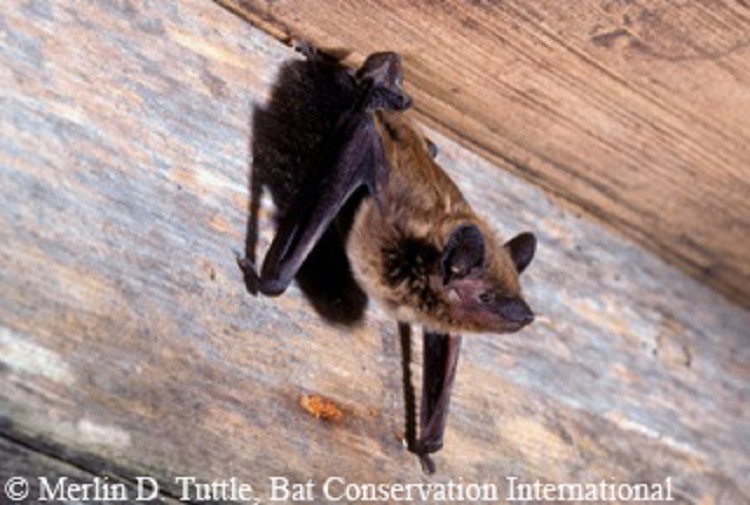