The Big Brown Bat is the most likely bat to inhabit man-made structures, but will also use many other natural shelters. Big Brown Bats can be found state-wide.

Description:  As the common name suggests, this bat is large and brown, but color varies from cinnamon brown to dark brown on the back, and is lighter on the belly.   The wing membranes, face, and ears are blackish, giving this species a "black & brown" look.   The body fur is long and soft, and the individual hairs show black bases and brown outer halves when parted (2 toned).   Ears are broad with rounded tips.   They have keeled calcars, and the wings and tail membranes are naked.

Similar Species: Evening Bats are much smaller in size. Tri-colored Bats are smaller and have fur that shows 3 different colors when parted.   Myotis bats are usually smaller.

Habitat: They hibernate in many different places such as hollow trees, rocky crevices, buildings, caves, mines, or road culverts.   Females establish nursery colonies during the summer in hollow trees, attics, chimneys, lofts, or caves.   Males will roost in trees or man-made structures.

Breeding information: Most mating occurs in the fall, but since this species is active for much of the year, this can vary.   Sperm is stored until spring, when fertilization occurs, usually leading to the birth of twins in early June.   The naked newborn bats, which have eyes that are closed, remain with the nursery colony as the mother goes out to feed.   They begin to fly at 3-4 weeks old and are fully grown at 2 ½ months.

Status in Tennessee:  Relatively common throughout its range, including Tennessee.

Fun Facts:
•Big Brown Bats are very hardy and are one of the last bats flying in the fall.
•When hibernating they are usually alone or in groups of 2 to 5.

Best places to see in Tennessee: Around man-made structures which offer protection, such as attics, garages, chimneys, shutters, and culverts. 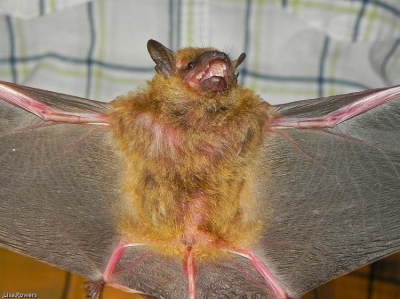