A statewide mail survey of randomly selected farmers and landowners from counties with known presence of wild hogs was conducted during Fall 2015 to assess their knowledge of and attitudes towards wild hogs, and the type and extent of damage from wild hogs.

Out of 5,000 that were invited, 1620 participated in the survey, (32.5% response rate).   Responses were analyzed to characterize public attitude, support for eradication programs and to estimate the statewide economic impact of damage attributable to wild hogs

The current study surveyed landowners in counties known to have established populations of wild hogs.   Results indicate that while the wild hogs and the damages are limited to certain parts of the state, the total impact is substantial, with estimated value of damage approximately $26 million in 2015.

Landowners spent nearly $2 million in estimated cost of controlling wild hogs on their property, resulting in a total of $28.31 million in value of damage and control cost incurred.

Results from this study have implications for managing wild hogs and informing decision making among government and private institutions concerned with wild hog problems in Tennessee.

The results indicate type, and intensity of damages caused by wild hogs, and may serve as useful baseline information to compare with future assessment of damage.

The damage they cause has become more common and widespread as during the last fifteen years as they have gone from being present in 15 counties in Tennessee to being present in nearly 80 of a total of 95 counties.

In 1999, TWRA made an attempt to control the expansion of the wild hog population by opening a statewide wild hog season with no bag limit.

Unfortunately, it was during this period of unlimited hunting that the wild hog population expanded the most.  Disjointed populations of hogs began to occur in areas of Tennessee where they had never existed before as the result of illegal stocking by individuals whose goal was to establish local hunting opportunities.

In 2011, new regulations were enacted that changed wild hog management.  Wild hogs are no longer regarded as big game animals in Tennessee.  In order to remove the incentive to relocate wild hogs, they are now considered a destructive species to be controlled by methods other than sport hunting.

It is illegal to possess, transport, or release live wild hogs. 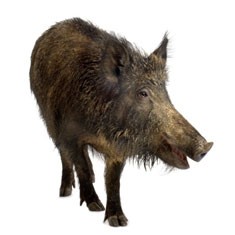 Landowners have more opportunity than ever before to control wild hogs on their properties.

They can shoot wild hogs year-round during the day without limit and trap with bait outside of big game seasons.   Furthermore, landowners may obtain an exemption from their TWRA regional office enabling them to kill wild hogs at night using a spotlight, and to trap year-round.   In addition, landowners in a four-county (Fentress, Cumberland, Pickett, and Overton) experimental area may use dogs as a wild hog control method.

Family members and tenants that qualify under the Farmland Owner License Exemption and up to ten additional designees may help private landowners with wild hog control efforts.  For properties over 1000 acres, an additional designee per 100 acres may be assigned.

No licensing requirements exist for landowners or their designees.  In order to renew each year, exemption holders are required to report the number of hogs killed on their property and the manner in which they were killed to TWRA.

Landowners may also take advantage of technical assistance provided by TWRA to help with a trapping program or additional wild hog control techniques.

Landowners may use the following methods:

Licensed Big Game Hunters may use the following means:

In Region 1, Big Hill Pond State Park(McNairy Co.) Huntable Lands:  The portion that is south of the railroad tracks is open to hunting during the statewide seasons. Wild hogs may be taken during deer season by licensed deer hunters.

In Region III, wild hogs may be taken incidental to deer hunts on the following WMAs: Alpine Mountain, Bridgestone-Firestone Centennial Wilderness, Catoosa, Skinner Mountain, Standing Stone State Forest, and Tellico Lake. Wild hogs may be taken on any deer or bear hunt on South Cherokee WMA.  There are also the following wild hog control seasons in which the use of dogs is permitted: two five-day control seasons on Catoosa WMA and one three-day control season on Skinner Mountain WMA.

In Region IV, wild hogs may be taken on any big game hunt on the North Cherokee; any deer or turkey hunt on Kyker Bottoms Refuge; and on any hunt, small game or big game, on the Foothills WMA and the entire North Cumberland WMA.

On the Big South Fork National River and Recreation Area, wild hogs may be taken with a special permit during any deer hunts and by small game hunters after the deer season.

Refer to the regulations for individual WMAs and public hunting areas to determine how and when hogs can be taken.  Individuals licensed to hunt bears may also take wild hogs during any proclaimed bear-dog hunt.

Wild hogs are known carriers of at least 45 different parasites and diseases that pose a threat to livestock, pets, wildlife, and in some cases, human health. The United States Department of Agriculture recognizes these risks and recommends the following precautions when handling deceased wild hogs:

The following video was created to help the public understand an order by the state veterinarian relating to feral, wild, and wild appearing hogs.