The elk come and go, so check back often!

(If you lose live video stream refresh your browser)

Thanks for watching the TN Elk Cam live from Hatfield Knob. We hope you enjoy watching the elk and all the other wildlife life that might pass by. If you would like to see the elk herd grow and/or enjoy this camera, consider making a donation to TN Elk Habitat Fund. Thank You!
Review the Tennessee Strategic Elk Management Plan 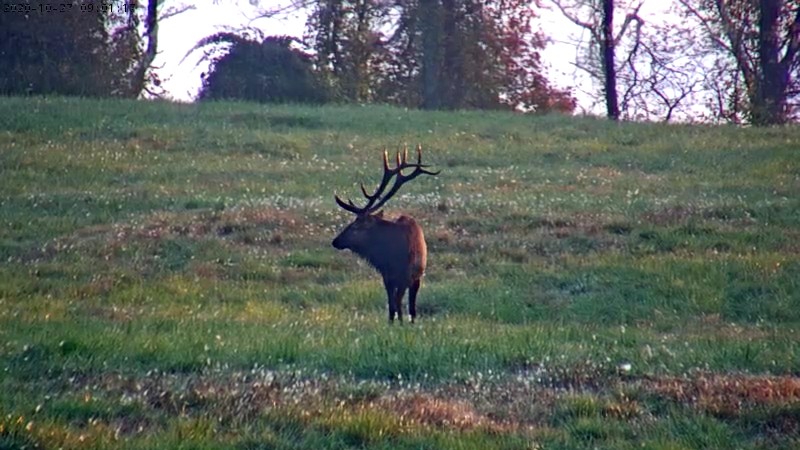 The Elk Viewing Tower on Hatfield Knob of North Cumberland Wildlife Management Area has been reconstructed.

The tower was recently named in honor of Terry and Jane Lewis, a local couple who have dedicated countless hours and resources to promoting Tennessee's elk herd.  Terry and Jane led the construction of the new, handicap-accessible tower, as well as the original tower constructed in 2005.

"It's been a long journey.  We certainly want to thank all of the volunteers that helped put this tower together and this viewing area for all the people to come and see," said Mr. Lewis during the opening ceremony.  "One of our efforts was to create a high probability of viewing opportunities and I think you have it right here."

The elk viewing tower and NCWMA have been longtime attractions of Campbell County, which boasts 48 percent of its land as public property.  A University of Tennessee study found that around 16,000 people visit the tower annually and thousands more enjoy viewing elk live through the TWRA elk camera also located at the tower.

The Rocky Mountain Elk Foundation has also been a strong partner in Tennessee's elk restoration, which began in the year 2000 when the first elk were released onto Horsebone Ridge of the now NCWMA.  To date, 201 elk have been released onto the area.

Directions to the Elk Viewing Tower

Moose has a large overhanging snout and brown rump.
Mule Deer is smaller and has black on the tail.
Whitetail Deer is smaller; no rump patch.
Woodland Caribou has whitish neck.Habitat
Semi open forest, mt. meadows (in summer), foothills, pains, and valleys.

Most active mornings and evenings.  Usually seen in groups of 25 or more; both sexes together in winter, old bulls in separate groups during summer.  Feeds on grasses, herbs, twigs, bark.  Migrates up mountains in spring, down in fall; males shed antlers Feb.– March; velvet shed in Aug.  Attains adult dentition at 2 1/2-3 years.  Calf has high-pitched squeal when in danger; cow has similar squeal, also sharp bark when traveling with herd; males have high-pitched bugling call that starts with a low note and ends with a few low-toned grunts, heard during rutting season, especially at night.  Lives 14 years (25 in captivity).  Females breed at 2 1/2 years.  Rut starts in Sept.; old males round up harems.

Can do considerable damage to vegetables, pastures, grainfields, and haystacks; a prize game mammal for meat and trophies; formerly ranged over much of continent, now restricted.  There have been numerous attempts to reestablish them, some successful, others not.  May be seen commonly in following national parks: Grand Teton, Yellowstone, Olympic, Glacier, Rocky Mt., Banff, and Jasper; also other places where they have been introduced.  Apparently established on Afognak I., Alaska (not on map).

How long has it been since elk roamed wild in the state of Tennessee?
The last historical record of an elk being sighted in Tennessee was in 1865 when one was reported to be killed in Obion County.

Where did the elk come from that were released into Tennessee?
The subspecies of elk that once roamed in Tennessee (Cervus elaphus canadensis) are extinct but a closely related subspecies of elk (Cervus elaphus manitobensis) were released into Tennessee in December of 2000. The initial elk released came from Elk Island National Park (EINP) in Alberta, Canada. The EINP elk herd is closely monitored for potential health problems and is considered one of the best sources of wild disease free elk. Another source for elk was from the Elk and Bison Enclosure at Land Between the Lakes, a herd that also originated from EINP.

What was the sex and age composition of elk released into Tennessee?
For each release approximately 75% of the elk were cows and 25% were bulls.   For the safety of the animals the bulls had their antlers removed prior to transporting them to Tennessee and mature bulls were transported apart from the rest of the animals.   A portion of the elk released were calves which were transported with their mothers.   It is almost assured that many of the mature cows were also pregnant upon release. 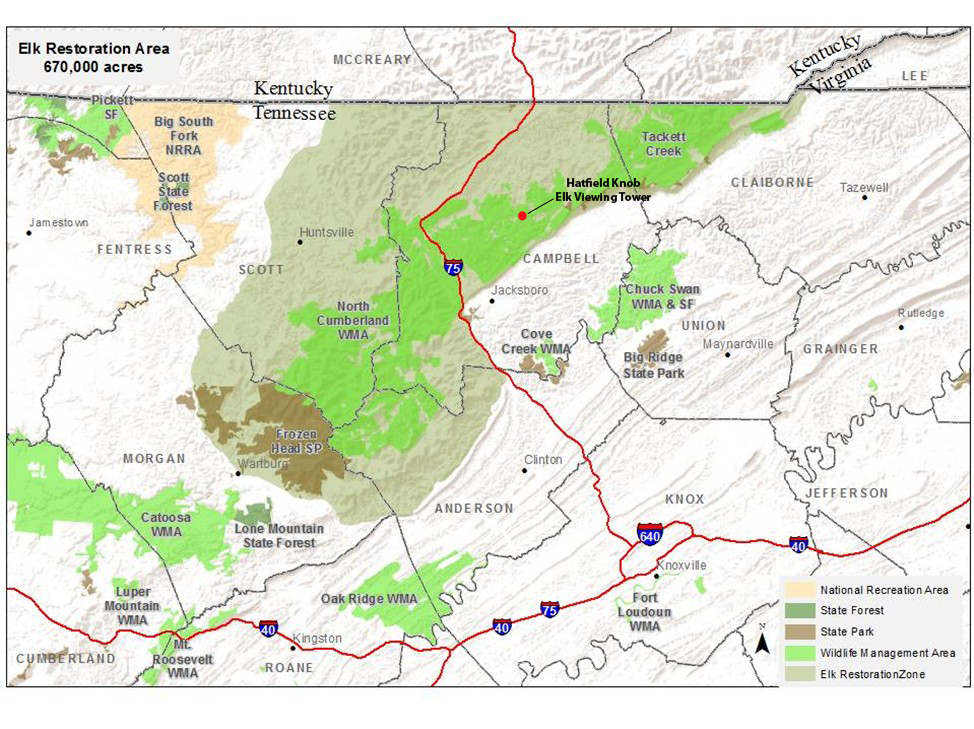 How far will elk travel?
It is difficult to say how far elk will travel as their movement patterns are largely determined by habitat. In western areas elk are very mobile mostly in response to availability of suitable habitat which may be influenced by weather conditions. In the eastern states that have elk, elk movements have been a lot less than that seen in western states. Michigan, for example, has an elk herd of 1300-1500 elk that are maintained on 512,000 acres.

Will elk be considered for release in other areas of the state?
The present elk restoration zone was chosen since it contains a large amount of public land that has few agricultural crops and is composed of suitable habitat for elk. Also, the area has a great deal of public support for elk and had volunteer groups such as Campbell Outdoor Recreation Association, Tennessee Wildlife Federation, and the Rocky Mountain Elk Foundation that provided support for the restoration project. At some future time (and after evaluation of this initial restoration effort), the agency may evaluate the feasibility of restoration in other areas. However, no specific plans exist at this time to restore elk in other areas.

Are elk hunted in Tennessee?
Elk hunting began in 2009 via a Quota System.

Where can people view elk in Tennessee?
All elk released were ear tagged and fitted with radio collars so that their movements can be tracked. An observation tower has been constructed on Hatfield Knob at the Sundquist Unit of the North Cumberland WMA. https://tnwf.org/elk-viewing-tower/

Will elk bring diseases to other Tennessee wildlife or to domestic livestock and pets?
All elk brought into Tennessee for release go through strict disease testing prior to release. This testing is much more thorough than that required for bringing captive elk into Tennessee. Also, the elk brought into Tennessee will come from areas where health surveillance has been ongoing for several years with no history of significant disease. All of these precautions will greatly minimize the risk of any diseases being introduced into the state.