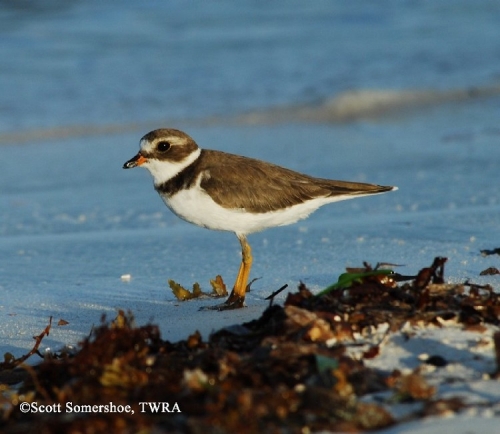 Semipalmated Plovers are easily identified, small shorebirds found in Tennessee during migration.  They nests across northern Canada and throughout Alaska, and are one of the more common shorebirds seen in winter on the Atlantic, Pacific, and Gulf coasts.

Unlike most plovers, Semipalmated Plovers appear to be increasing in numbers, perhaps owing to their versatility in food and habitat choice, their widespread coastal winter distribution, or their recent habitat expansion in the sub-Arctic as a result of disturbance caused by both humans and arctic geese.

Description: This small shorebird has a short neck, is brown on the back and wings, has a single wide brown band across a white chest, and has a small white patch on the face above the bill.  In fall, the bright orange bill turns dark and the legs become a duller yellow.

Males and females look similar, and juveniles look similar to nonbreeding adults, however the wing feathers often have some pale buff fringes that give the bird a scaly appearance and the breast band may be interrupted.

Nesting and reproduction: The Semipalmated Plover has not been documented nesting in Tennessee.

Status in Tennessee: Semipalmated Plovers are widely dispersed, and a fairly common migrant shorebird in Middle and West Tennessee, but less common in East Tennessee. They are typically not seen in large numbers in any one location. In the spring they are generally found in Tennessee from mid-April through May and in the fall from late July through October. There are very few records of individuals in the winter or summer months in Tennessee.