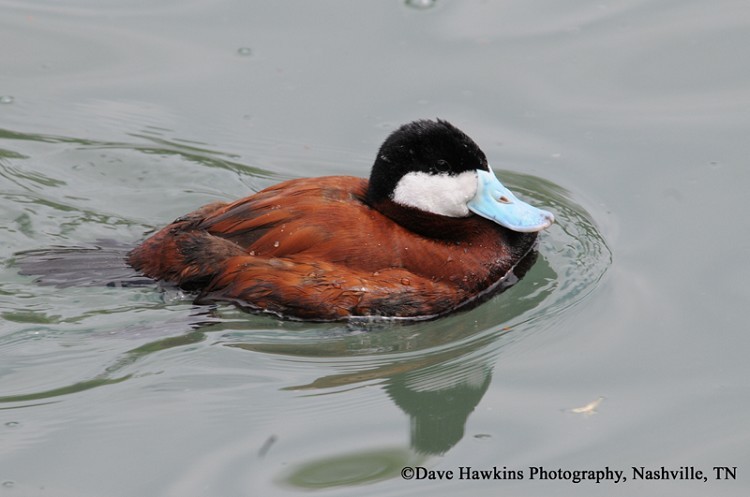 The Ruddy Duck is the only "stiff-tailed" duck regularly found in North America.  The name refers to the long spiky tail that they often hold nearly straight up.

Ruddy Ducks winter in small numbers throughout most of Tennessee and can be found in the state from mid-October to early May.  Their breeding range extends from central Canada across most of the western United States and Mexico.  They winter along both coasts, across the southern United States, and southward to northern Central America and the Caribbean.

They were introduced into Britain where they are considered a pest species.

Description: This large headed, chunky, thick-necked duck often swims with its long tail cocked up.  In breeding plumage (March-August), the male has a reddish-brown body, a powder blue bill, and the black head has a large conspicuous white cheek-patch.  During the rest of the year the cheek-patch is still obvious, but the bird is overall brown, and the bill is gray.

The female looks similar to the non-breeding male, but is duller with a dark line through the cheek patch. In flight, the wing is all-dark.

Habitat: In Tennessee, found on ponds, lakes and rivers.

Status in Tennessee: The Ruddy Duck is a fairly common migrant in the state and an uncommon winter resident.  They arrive by mid-October and depart by early May.

Best places to see in Tennessee: Ponds, lakes and rivers across the state.