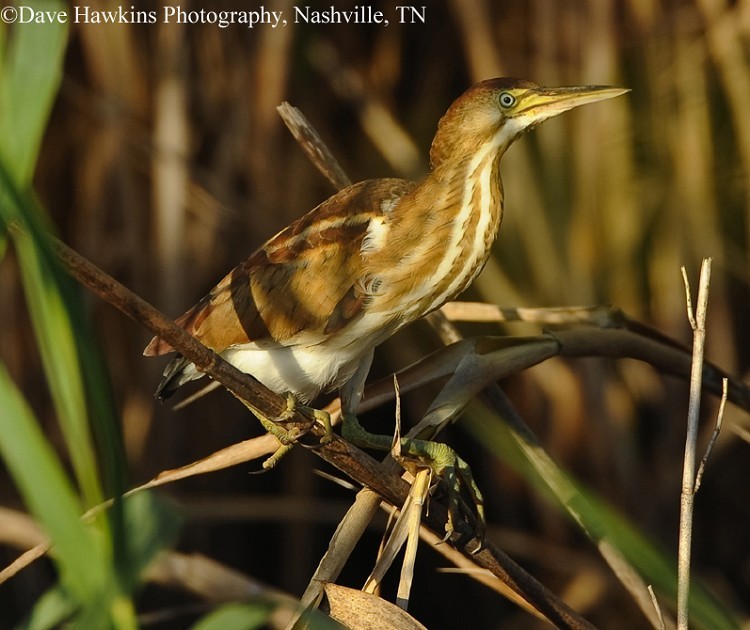 The Least Bittern is the smallest of the herons and one of the most difficult species to see in Tennessee. It is not only secretive in its behavior but inhabits dense marsh vegetation.

It breeds in scattered locations across the state and is present in Tennessee from late April to September. The Least Bittern breeds in wetland areas throughout the eastern U.S. and along the Pacific coast, and in scattered localities in the western states, Mexico, the Caribbean, and Central and South America.

They spend the winter from the mid-Atlantic seaboard to south Florida and southward through South America. Their low coo-coo-coo song is reminiscent of a Black-billed Cuckoo song.

Description: This tiny, secretive heron has a long neck and bill, and a dark crown and back. The neck and sides are a buffy-yellow, and the front of the neck and chest are striped orange and white. The wings have conspicuous pale brown patches visible in flight.

Males and females are similar, but females have more muted colors.

Habitat: Marshes with tall, emergent vegetation, such as cattails, giant cutgrass, and rushes with areas of open water.

Nesting and reproduction: Least Bittern pairs may nest singly or in loose colonies. They will nest in large and small marshes. In Tennessee, a pair of Least Bitterns was found nesting in a marsh of only 1 acre in size.

Incubation: Both adults incubate the eggs for 17 to 18 days.

Fledging: Both adults feed the young, which leave the nest in 6 to 9 days.

Nest: The nest is an elevated platform of marsh vegetation with a canopy made by pulling tall marsh plants over and crimping them in place. It is placed in dense, tall stands of vegetation, usually close to open water.

The male does most of the nest building. In Tennessee, nest heights range from 4 inches to 4.5 feet above the water.

Status in Tennessee: The Least Bittern is an uncommon migrant and summer resident in Tennessee arriving in late April and departing by late September. It breeds in scattered locations across the state.

Listed as In Need of Management by the State of Tennessee.