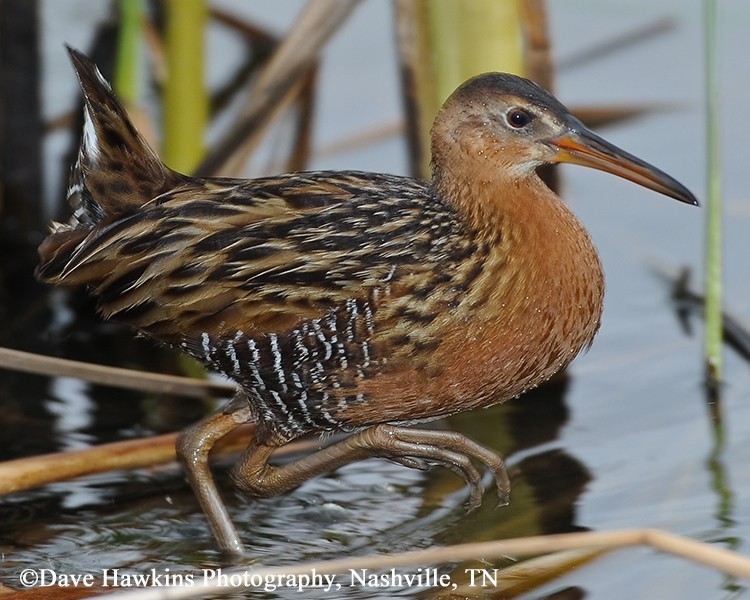 The King Rail is a reclusive bird of fresh water marshes, and is more likely to be heard than seen. Loss of wetlands appears to be the cause of an alarming rangewide population decline over the past 40 years.

The King Rail is widely distributed across the eastern U.S., with higher densities along the Gulf coast of Texas and Louisiana, and in Florida.  Northern populations are migratory.

In Tennessee, the King Rail is a rare migrant and summer resident, and is usually present in the state from early April to early October.

Juvenile birds (July–September) look similar to adults, but neck and chest mottled brown and barring on flanks is less distinct.

Habitat: The King Rail nests in shallow water marshes, with emergent vegetation, such as cattails, bulrush, and sedges.

Diet: Crayfish and aquatic insects. Most foraging is done in water 4” deep or less.

Nesting and reproduction: King Rails are monogamous, and often return to the nest site used in previous years.

Clutch Size: In Tennessee, completed clutches contained from 7 to 13 eggs, with and average of 10.1 eggs.

Incubation: Both adults incubate the eggs for 21 to 23 days.

Fledging: Young leave the nest shortly after hatching.   They are fed by both parents for the first month, and can mostly feed themselves after 2 months.  They will remain with the adults for 9 weeks or more.

Nest: During courtship, the male may build numerous "dummy nests" in addition to the one where eggs are actually laid.  The nest is bowl-shaped and made of loosely woven marsh vegetation, often with a canopy. In one Tennessee study, nest heights ranged from 2” to 20”, with an average height of 3.5.”

Status in Tennessee: This rail is rare but regular in Tennessee during migration, and is a rare nesting and wintering species.  It usually arrives in the state in early April and departs by early October. The King Rail is not considered a game species in Tennessee, and is currently listed as In Need of Management.

Best places to see in Tennessee: Most easily observed in spring when courtship calls can be heard anytime of day or night.  Recent nesting has occurred at Tennessee NWR, Duck River Unit. They formerly nested at Reelfoot Lake (Black Bayou WMA), and Alcoa Marsh, Blount Co.