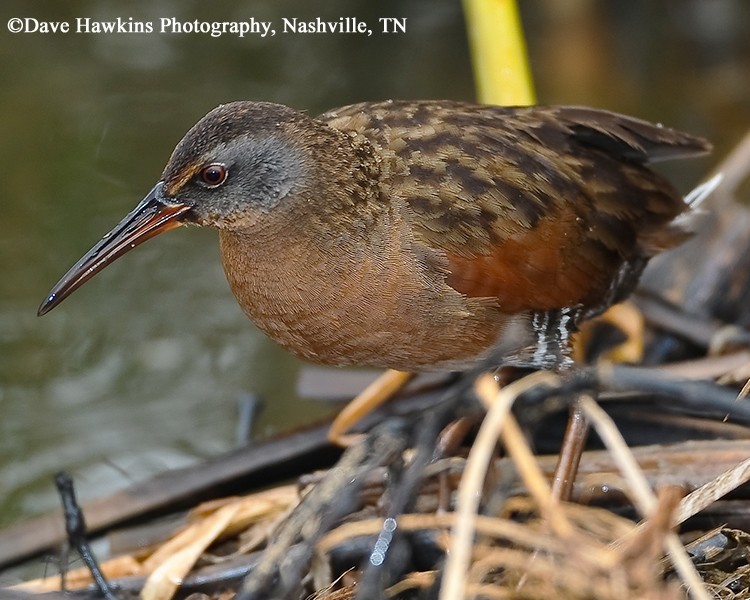 The expression "skinny as a rail" comes from the fact that all rail species can laterally compress their bodies and walk through the marsh without moving a blade of grass.  The Virginia Rail is a reclusive bird of fresh and saltwater marshes, and is usually seen only when it comes out to feed on mudflats.

It breeds in marshes from southern British Columbia to Nova Scotia, south to Baja California, and along the mid-Atlantic coast, with scattered nesting inland.  In winter, it is primarily found along the coastlines from New Jersey and southern Canada to Mexico, and scattered locations inland.

In Tennessee, this rail is a rare permanent resident, and an uncommon migrant, primarily in Middle and East Tennessee.

Nesting and reproduction: The Virginia Rail builds numerous "dummy nests" in addition to the one where eggs are actually laid. In Tennessee, they have been found nesting in marshes 8 to 20 acres in size.

Incubation: Both adults incubate for 18 to 20 days.

Fledging: Young leave the nest within 2 to 3 days of hatching, and are brooded in a specially built nest, constructed by the male, near the original nest.  Both adults care for the young for at least 3 weeks.

Nest: Both adults build the bowl-shaped nest of loosely woven marsh vegetation, often with a canopy, usually placed above shallow water. Tennessee nest heights range from 3.5 to 10 inches above the water.

Status in Tennessee: This rail is rare but regular in Tennessee during migration, and is a rare nesting and wintering species, primarily in Middle and East Tennessee.  It usually arrives in the state in early April and departs by early October. Although the Virginia Rail is considered a game species in Tennessee, as well as throughout North America, hunters seldom take it.

Best places to see in Tennessee: Easiest to find in spring by vocalization.   Can be found in half acre to larger marshes in Middle, but especially East Tennessee.