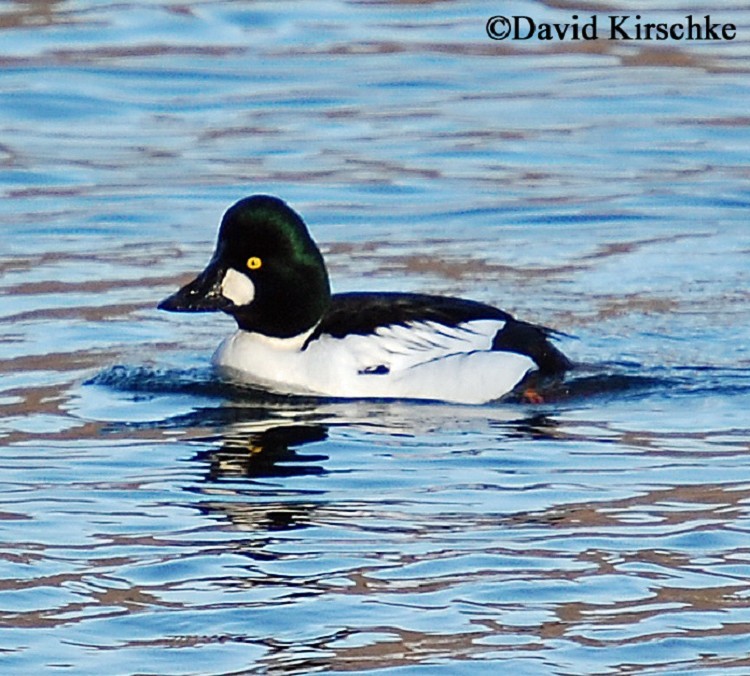 The Common Goldeneye is a cold-hardy, circumpolar, cavity nesting, diving duck that breeds in the northern boreal forests of North America and Siberia.  It is one of the last ducks to migrate south in the fall and will winter as far north as they can find ice-free water.

The Common Goldeneye is an uncommon wintering bird in Tennessee and may be found in the state from early November to early April. The North American breeding range extends across the forested regions of Canada, and most birds winter along the Pacific and Atlantic coasts, but also inland from southern Canada to Mexico.

Description: The male’s head is greenish-black with a bright white oval patch near the base of the bill.  The back, wings, and tail are black, and the sides, breast, and belly are white, and the eye is a golden-yellow.

The female’s head is chocolate brown, her body is gray, and she has a pale yellow eye.  In flight both the male and female have a white patch in the wing; the male’s patch is larger and solid white. When the birds take flight the wings make a distinctive whistling sound.

Habitat: In Tennessee they are found on ponds, deeper lakes and rivers.

Status in Tennessee: The Common Goldeneye is an uncommon wintering bird throughout the state and a fairly common migrant.  They arrive in early November and depart by early April. Over 1200 Common Goldeneye were seen in December 2009 at Pace Point in the Tennessee NWR - Big Sandy Unit.

Best places to see in Tennessee: State and federal waterfowl refuges across the state.

Pace Point in the Tennessee NWR - Big Sandy Unit, and Paris Landing State Park are good places. They may occur on other reservoirs across the state.